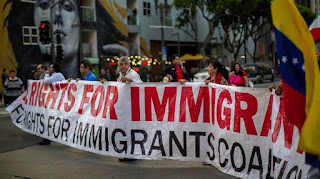 File Photo: People march on May Day, also known as International Workers Day, on May 1, 2019 in Los Angeles, California. Thousands are participating in multiple May Day marches and rallies around Los Angeles, calling for support of labor and immigrant concerns such as wage improvement, immigration reform and a citizenship question in the upcoming national census.(Photo by David McNew/Getty Images)

SACRAMENTO (NBC LOS ANGELES) -- The agreement means low-income adults between the ages of 19 and 25 living in California illegally would be eligible for California's Medicaid program.

California will become the first state in the country to pay for some adults living in the country illegally to have full health benefits as the solidly liberal state continues to distance itself from President Donald Trump's administration.

Democrats in the state Legislature reached an agreement Sunday afternoon as part of a broader plan to spend $213 billion of state and federal tax money over the next year. The agreement means low-income adults between the ages of 19 and 25 living in California illegally would be eligible for California's Medicaid program, the joint state and federal health insurance program for the poor and disabled.