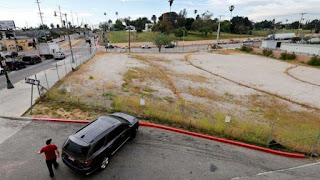 LOS ANGELES (LOS ANGELES TIMES) -- A developer notched a victory Wednesday over business owners who had been seeking to block a homeless housing project next to his Boyle Heights shopping center.


The owners of the landmark El Mercado had appealed the city’s approval of the 49-unit apartment building for mentally ill homeless people, and then went to court after the L.A. City Council overturned their appeal.

In a tentative ruling on Wednesday, Superior Court Judge Richard L. Fruin Jr. said the owners failed to show substantial evidence for their claim that Los Angeles planners had improperly approved the proposal without a full environmental review.

“Words cannot express how thrilled we are and gratified by the judge’s tentative ruling,” said Dora Leong Gallo, executive director of A Community of Friends, a nonprofit developer that has been working for years to develop the property.

The case was closely watched by proponents of affordable and homeless housing as a test of how a project funded by the city’s $1.2-billion Proposition HHH homeless housing bond would fare against anticipated neighborhood opposition.

In a multi-part ruling, Fruin rejected arguments from the developer and the city that the project, called Lorena Plaza, was not subject to challenge on environmental grounds and that the appeal was filed too late.

But his 21-page ruling also refuted a litany of arguments made by attorneys for El Mercado.

The judge said city planning officials had acted correctly in approving the housing project with a declaration, which acknowledged the environmental issues that could be mitigated during construction to the point there would be no substantial effects.

The late Pedro Rosado, who built El Mercado into an Eastside institution, and his son Tony Rosado, had appealed that decision, contending that the presence of an abandoned oil well on the property required a full environmental review.

Fruin ruled that the oil well had been adequately addressed in environmental studies of the property on First Street just east of Evergreen Cemetery, and that any issues that arose during construction would be monitored by the appropriate state agencies.

The judge also rejected the Rosados’ argument that the homeless housing project is inconsistent with the Boyle Heights Community Plan.

A Community of Friends acquired exclusive rights to the property from the Metropolitan Transportation Authority, which obtained it during construction of the Eastside extension of the Gold Line.

Councilman Jose Huizar, who was a board member of the transit agency, opposed the housing project in 2013 and continued to oppose it five years later before the Los Angeles Planning and Land Use Committee.

Then, in a dramatic about-face last March, Huizar led a City Council vote to deny the Rosados’ appeal. Huizar said he changed his mind after the developer offered changes that resolved his concerns.

The developer committed to a state-monitored evaluation of any potential environmental issues and to comply with any recommendations.

Fruin allowed both sides time to argue his tentative ruling and said he would issue a final decision in 15 days.