Russia: World No Longer Trusts U.S., Others Stepping In 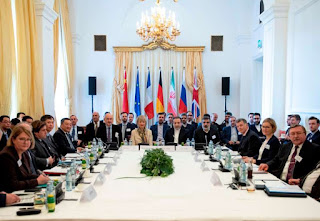 Abbas Araghchi (center right), political deputy at the Ministry of Foreign Affairs of Iran, and Helga Schmid (center left), secretary general of the European Union's External Action Service, with their delegations take part in a meeting of the Joint Commission of the 2015 Iran nuclear deal, in Vienna on March 6. Image: Joe Klamar/AFP/Getty

MOSCOW (NEWSWEEK) -- Russia's top diplomat has argued that the world is losing faith in the United States as a global leader and that the international community has sought a more diverse approach to global decisionmaking.

At an annual address to Moscow's diplomatic academy, Russian Foreign Minister Sergey Lavrov hailed on Friday a new geopolitical era marked by "multipolarity," stating that "the emergence of new centers of power to maintain stability in the world requires the search for a balance of interests and compromises." He said there is a shift in the center of global economic power to East from West, where a "liberal order" marked by globalization was "losing its attractiveness and is no more viewed as a perfect model for all."

"Unfortunately, our Western partners led by the United States do not want to agree on common approaches to solving problems," Lavrov continued, accusing Washington and its allies of trying "to preserve their centuries-old domination in world affairs despite objective trends in forming a polycentric world order." He argued these efforts were "contrary to the fact that now, purely economically and financially, the United States can no longer—single-handedly or with its closest allies—resolve all issues in the global economy and world affairs."

"In order to artificially retain their dominance, to regain indisputable positions, they employ various methods of pressure and blackmail to coerce economically and through the use of information," he added.

Washington and Moscow, rival superpowers during the decades-long Cold War, have somewhat resumed their bout for global influence in the 21st century. Russian President Vladimir Putin has set to restore and revamp his country's military and political posture, which were deeply damaged in the collapse of the Soviet Union, leaving the U.S. entirely unmatched.

Despite President Donald Trump's promises of detente, the U.S. has doubled down on sanctions and other measures designed to push back against the Kremlin since the Republican leader entered the White House. Trump and Putin, once seen as potential political allies, have continued to feud over conflicts in Ukraine and Syria and, at times, have both found themselves largely isolated internationally.

The Trump administration has repeatedly threatened sanctions against several nations, including allies, for not adhering to its policies targeting stated foes such as Iran, North Korea, Syria and Venezuela.
Newsroom Russia Vladimir Putin World View