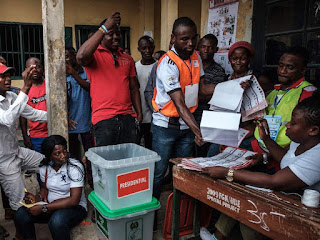 Officials count votes in front of voters during the presidential and parliamentary elections on February 23, 2019, at a polling station in Port Harcourt, southern Nigeria. Image: AFP

ABUJA (AFP)--Sixteen people were killed on Saturday in electoral violence across Nigeria during presidential and parliamentary elections, a network of civil society organisations said.

The Situation Room umbrella group of pro-democracy groups, which is monitoring the vote, said on Twitter that "16 deaths have been recorded across 8 states".

Six people were killed in the southern state of Rivers, which has long been a flashpoint for violence, while two others were killed in neighbouring Bayelsa.

Two people were killed in Borno and Yobe states in the northeast; two in the north central state of Kogi; and two in Ebonyi, in the southeast.

One person was killed in Zamfara, in the northwest, and another in Lagos, in the southwest, which also saw ballot boxes and papers set on fire, the monitors said.

There were reports of vote-buying in six states, they added in a mid-afternoon update.

Electoral violence, which has marred previous votes in Africa's most populous country, was relatively low compared to other years. Most voting took place without incident.

Nigeria's Centre for Crisis Communication, which comprises representatives from security agencies, on Friday identified 12 election flashpoints around the country.

Analysts SBM Intelligence said 233 people were killed in 67 incidents of election-related violence from last October to Friday -- an average of two people per day.

In oil-rich Rivers, police said unknown gunmen shot dead a former local government leader and his brother in the Andoni area of the state.

Both were members of President Muhammadu Buhari's ruling All Progressives Congress (APC) party.

"Police have moved in to restore order in Okrika and INEC (Independent National Electoral Commission) is making efforts to ensure voters are not disenfranchised in the area," he said.

At one polling unit in the Yaba area of Lagos, AFP reporters witnessed bloody fights between youths, as unknown men distributed cash to waiting groups.

There were also reports of voter intimidation by thugs, according to local residents.

But in many other areas, voting went on without disruption.
AFP Electoral Mess Nigeria