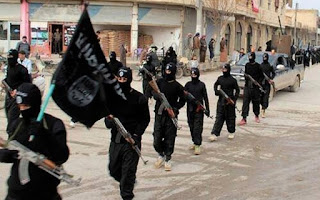 
The activities of a terrorist group, Islamic State’s West Africa Province, an affiliate of ISIS, could affect the forthcoming general elections in Nigeria, a report has claimed.

The Wall Street Journal said ISWAP, which is working closely with its leaders in Niger and Chad, had been fortified with the return of fighters, who trained in Libya and the Middle East.

The report agrees with a recent statement by the United States Government.

The US, citing intelligence, claimed ISWAP was planning to attack security forces, infrastructure and public places in Nigeria during the general elections.

The WSJ report said in contrast to Boko Haram and its killing of civilians, ISWAP’s estimated 5,000 men focus attacks on security forces and non-governmental organisations, following tactical advice from Syria.

According to the report, the group overran and looted military bases in December 2018 in Baga, leaving hundreds of soldiers dead and seizing weapons.

Security officials were said to have described the new group as a bigger threat than Boko Haram, given its sophistication.

“The weapons are being smuggled from Libya to their factions in Nigeria and Mali,” the WSJ report quoted an arms smuggler in Niger named Yusuf as saying.

“They want their own country,” he added.

While quoting Nigerian and western officials, the report said ISWAP had taken control of hundreds of square miles of Nigerian territory.

US intelligence chiefs, in a formal risk assessment last week, reportedly said the rapid rise of the group foreshadows the next chapter for ISIS, adding that its local allies were expanding and carving fundamentalist enclaves.

ISWAP, which was established in 2016 after a violent split in Boko Haram, is led by a young commander, Abu Musab al-Barnawi.

It controls trade routes, taxes the local fish industry, regulates agriculture and imposes its extremist brand of Islamic justice, according to the report.

According to traders and herders who move between the region ISWAP controls and refugee camps in Maiduguri, the group has wells, provides seeds and fertilizer, pasture for herders.

“If we obey their rules, they let us trade. They let us farm,” a trader, Garba, said.

Aid agencies report that some of the 1.5 million Nigerians who have spent much of the past decade in refugee camps are returning to areas where the jihadists hold sway.

Dialogue between the faction and Islamic State commanders in Libya and beyond is regular, according to African, US and European intelligence officials.

The Muhammadu Buhari administration, which claimed to have technically defeated Boko Haram, is said to be struggling against the Islamic State group.

The WSJ report said, “His military is stretched, deployed against pirates and oil thieves in the South and having to police religiously tinged battles over farmland in central regions.

“Nigerian soldiers reportedly said they had the same equipment with members of the group; but the army often had less ammunition.”

It said, “ISWAP has sent drones to spy on Nigeria’s army. Its fighters sometimes ride horseback to avoid detection by the surveillance planes and satellite photos tracking them. Learning from ISIS’s defeats in Syria, the group avoided holding population centres, giving warplanes fewer targets to strike.”