Another 162 Stranded Nigerians Return From Libya 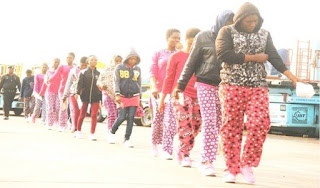 ABUJA (LEADERSHIP)--The National Emergency Management Agency (NEMA), yesterday received another batch of 162 stranded Nigerian returnees from Libya.
The coordinator, Lagos Territorial Office of NEMA, Alh. Idris A. Muhammed received the returnees on arrival at the Cargo Wing of the Murtala Muhammed International Airport (MMIA), Ikeja at about 3:30 am yesterday, via Libya Airlines.

The returnees consisted of 100 females including four pregnant women and 62 males with the analysis of the returnees after profiling showing that 82 adult females (13 children, five infants) and 50 adult males (four children and 13 infants) with two minor medical cases were brought back.

The coordinator, while welcoming the returnees, urged them to be agents of positive change and take up the challenge against irregular migrations by telling whoever wants to embark on such dangerous journeys to desist from it.

“Migration is protected by International and national statutes for movement of people through proper regularisation of papers that would protect and save you against risks of irregular migrations.”
Muhammed stated that NEMA hosted a team from European Union on monitoring and evaluation of the special EU intervention on assisted voluntary return of migrants.

NEMA interfaced with them on the ways of improving the present European Assisted Voluntary Returnees projects being run by IOM.

He said gaps were identified, especially on logistics which are causing nightmares to stakeholders and the returnees but on the whole the rescheduling of aircraft charter flights would be improved upon.

The exercise which began in April, 2017 is expected to end by April,2020 and about 8,808 returnees have so far been repatriated back home to Nigeria from the North African country.
Africa Leadership Nigeria Libya Society