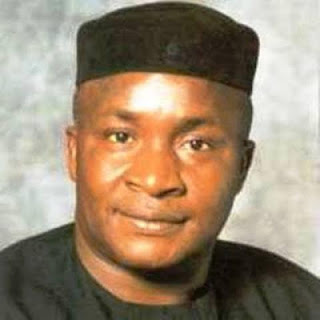 (FILE PHOTO): Former Governor of Imo State, Achike Udenwa. Udenwa was governor between 1999 and 2007 and Federal Minister of Commerce and Industry between 2008 and 2010 under the Goodluck Jonathan's administration.

Governor Ikedi Ohakim at the inauguration of the state Council of Elders was particularly irked that the state is indebted to the tune of N10 billion in pension and gratuity arrears dating back to 1994.

He also told the stunned Imo Elders that debt owed to contractors amount to over N14 billion, adding that we have over 250 un-energized transformers lying waste in many communities and over 300 dysfunctional water schemes.

His words: "As I speak to you, this state is saddled with a bloated, disgruntled, demoralized and ill-motivated workforce riddled with ghost workers."

"Imo State is the only one in the federation with a ratio of 80 per cent of its revenue going to recurrent expenditure and only 20 per cent left for capital projects."

While wondering how the state can develop under this type of scenario, Ohakim however said that he has set up audit committees for the state civil service and local government councils.


According to the Governor, the state has 6,458 teachers, 128 doctors with only four consultants in the whole state, stressing that health institutions are in sorry state.
Achike Udenwa Igbo Ikedi Ohakim Imo State Nd'Igbo Owerri Society