Jordan Plans To Revoke Parts Of Its Peace Treaty With Israel 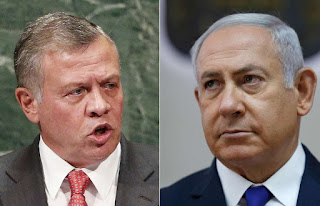 JERUSALEM (THE WASHINGTON POST) —Jordan’s King Abdullah II announced Sunday that he does not plan to renew parts of the country’s 24-year-old peace agreement with Israel, amid public pressure to rebuke the Israeli government following the U.S. Embassy’s move to Jerusalem and ongoing violence in Gaza.

In Israel, the announcement was received with surprise. Analysts said it was a populist move by the king aimed at opposition groups. Prime Minister Benjamin Netanyahu, however, appeared unruffled by the announcement. He said relations with Jordan were still strong.

The parts Jordan wants to revoke relate to two parcels of land Jordan leased to Israel for 25 years. The lease on the two territories — known as Baqoura and Ghumar in Arabic and Naharayim and Zofar in Hebrew — ends in one year. Jordan had until Thursday to make clear to Israel it would not renew the arrangement.

“Baqoura and Ghumar are Jordanian lands and will remain Jordanian and we will exercise full sovereignty over our territory,” the king said, according to a royal court statement.

The peace treaty with Israel is deeply unpopular in Jordan, where people claim that successive Israeli governments have failed to live up to water-sharing agreements. Israel’s ongoing occupation of Palestinian territories is also a source of anger among Jordanians.

Speaking at an official memorial for Rabin, who was assassinated by an Israeli citizen in 1995 because of his push for peace, Netanyahu played down Abdullah’s announcement, saying he would try to negotiate an extension to the existing arrangement.

He said the agreement between Israel and Jordan was one of true peace and “an important asset to both countries.”

In Jordan, however, the decision to downgrade its arrangement with Israel sparked celebrations. There has been a push in recent months to cancel the lease agreement and demand that Israel return the land. Both areas are used for agricultural purposes.

Large-scale protests over the weekend urged the king to reclaim the Jordanian territory. After his announcement Sunday, Jordanians took to social media, with one person calling it a “historic and wise decision.”

Abdullah also tweeted: “Baqoura and Ghumar have always been at the top of our priorities and our decision to terminate the annexation of Baqoura and Ghumar from the peace treaty is based on our commitment to take all necessary decisions for Jordan and Jordanians.”

Throughout the years, there have been sporadic periods of tension between the two countries. Three years after the agreement was signed, a Jordanian soldier killed seven Israeli schoolgirls visiting one of the territories now under discussion. Ahmed Daqamseh spent 20 years in prison but was released after Jordanian lawmakers petitioned on his behalf.

More recently, relations have been strained over the status of the flash-point al-Aqsa Mosque compound, referred to by Jews as the Temple Mount, in Jerusalem and in the aftermath of a shooting at the Israeli Embassy in Amman in which two Jordanian citizens were killed.

“From my point of view, this is not as dramatic as it sounds,” said Shaul Mishal, a professor of Jordanian and Palestinian politics and history at Tel Aviv University. “Historically speaking, the relationship between Israel and Jordan has existed for many years, and, simply put, Jordan cannot exist without Israel.”

He said it was likely that Netanyahu had known about the decision beforehand and that “it is symbolic, more than anything else, to gain the support of the opposition.”

“I’m not surprised at any development in the relations between the two states,” said Oded Eran, a former Israeli ambassador to Jordan. “But Jordan faces particular difficulties with regards to water and energy, as well as an addition of 1.5 million Syrian refugees to its population. These circumstances indicate that it is in Jordan’s own interest to continue adhering to the peace treaty.”