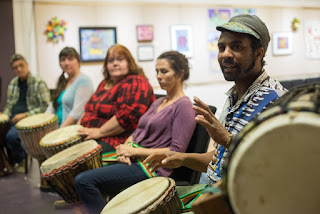 Mitch Endioc (left), Susan Freeman, Beth Maccombs and Kathryn Cooper listen to Lawrence R Greene (right) as he instructs them on technique and style during their Ugata drum class in Arts West in Athens, Ohio. Greene has practiced and played the drums for seven years and began teaching this class two years ago. (HANNAH SCHROEDER | FOR THE POST)

ATHENS, OHIO (THE POST) -- On the stage of ARTS/West on a Tuesday night, 15 people sit in a circle with African drums placed in front them. Some have the instruments strapped around their abdomens, and some grip them between their legs. Some wear shoes, and some are barefoot.

As the rhythm begins, some eagerly smack their drums with strong hands. Some gently tap the drum head, listening carefully. Some smile, bouncing in their seats to the beat. Some sit still, frowning slightly in concentration.

In the center of the circle sits Lawrence Greene. He wears bright colors and has a bright smile, beaming at his students as he leads their musical performance, wiggling in his seat and stomping his heels to make the bells tied to his ankles jingle.


For 12 years, Greene has taught African drumming classes in Athens, and for the past two years, he has taught the Tuesday night group of adults, most of which are retirees. The experienced musicians travel the area, performing at local events like the Mid-Ohio Valley Multicultural Festival. Greene has also organized an African dance class at Factory Street Studio, which sometimes accompanies the drummers during their local performances.

The classes cost participants $10 per session. But it makes enough profit to allow Greene to work full time on his programs, which he calls Ugata. The name serves as a type of acronym for Underground African Themed Art.

With the money he makes from his Ugata programs, Greene is able to take his African music expertise to schools around Southeast Ohio and West Virginia to start a dialogue on diversity.

“The main purpose of it … is to give people in the area who wanted a cultural outlet,” he said. “Or taking it places in Appalachia that are primarily white areas just to be able to break that cultural boundary and have some kind of dialogue and conversation while they’re actually doing the cultural art instead of just having it lectured.”

In his weekly Athens classes, Greene said he hopes to foster a sense of togetherness for the participants and bring people together over a shared activity they might never have imagined themselves doing.

“It really is just something that, even traditionally, just builds community when you’re all sharing a cultural activity together,” he said.

It seems he has succeeded in creating an atmosphere that promotes unity. The group has even taken to forming impromptu “drum circles” on College Green during weekday afternoons. Many of his students agree that drumming together is one of their favorite things to do.

Several drummers, who were part of the original group, were prompted to sign up by their friend Sheila Mark.

“I heard it at one performance and I thought it sounded like fun,” Mark said. “And I had read an article that said it was good for your brain to play music.”

In the beginning, the group said they struggled. But Greene was unfailingly patient, making every step of their learning and improvement enjoyable. What started as a six-week venture has grown into years of fun spent traveling and making music with friends.

“It’s like we’re an orchestra making music, so when that all comes together, it really I think makes it special for everybody,” Cindy Birt, another drum student, said. “We recommend it to everybody we see.”
Culture Music West Africa World Music
Reactions: