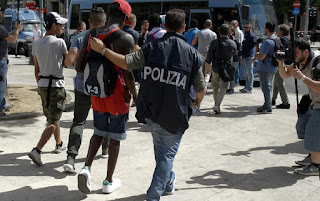 Italian Police check people during a blitz outside Milan’s main train station, Italy, Wednesday, July 26, 2017. Authorities have detained several dozen people in response to an increasing public security issue as the city deals with a new wave of migrants.

With the foundering of a European Union plan to redistribute thousands of migrants rescued at sea and brought to Italy, Gentiloni said his center-left government would brief lawmakers next week about Libya's request for Italian navy vessels to patrol its Mediterranean shores.

Libyan Prime Minister Fayez Serraj, who leads a U.N.-backed unity government based in Tripoli, met in Rome with the Italian leader on Wednesday and asked for the assistance. Gentiloni said his government was working out the details of a proposed naval mission.

"The request that came to us from the Tripoli government for collaboration and assistance for the Libyan coast guard can be a turning point in handling the situation," Gentiloni said. "The fact that the Libyan authorities ask Italy to collaborate, and not to substitute, (in the role of) fighting traffickers is important."

The premier noted that Italy already has furnished Libya's coast guard with speedboats and training aimed at improving Libya's own patrols. Traffickers, exploiting widespread lawlessness in the violence-wracked, fractured north African nation, have sent hundreds of thousands of migrants in unseaworthy smuggling boats toward Italy over the last few years.

Military ships from European nations, vessels organized by aid organizations and commercial cargo frequently pick up men, women and children making the perilous Mediterranean Sea crossing. Lately, most of those rescued at sea have been economic migrants from African nations unlikely to win asylum.

Italy has acknowledged the problem of might happen to migrants who are prevented from reaching Italy and returned to Libya. Rescued migrants have told Italian authorities and humanitarian organizations about torture, rape, forced labor, beatings and other atrocities they suffered in Libyan camps while awaiting their turn to be smuggled out by sea.

The Italian government's strategy foresees international organizations on the ground helping to guarantee the proper treatment of those forced to return to Libya and their eventual repatriation to their homelands. However, organizations that work with refugees have expressed doubts that Libya's deteriorated security situation would allow them to properly carry out such a humanitarian mission.

Analysts have said that some of the very militias that support Serraj and help him hold on to power in western Libya also profit from trafficking, complicating chances for the success of anti-trafficking patrols. Meanwhile, long stretches of Libya's coastline are not under the control of Serraj's supporters.

Lawmakers from Italy's far-left parties might balk at approving a naval mission to Libya. But any lack in their support could be compensated by center-right opposition lawmakers who have been demanding more vigorous efforts to stem the flow of migrants to Italy.

"I am certain of the results with the vote of Parliament," Gentiloni said. Italy's next general election is scheduled to take place in less than a year. Earlier this week, Serraj and rival Libyan leader Gen. Khalifa Hifter, the Egyptian-backed commander of Libya's self-styled national army, met in France and pledged to back a cease-fire and to work toward national elections.