India Signals It Will Continue To Buy Oil From Russia 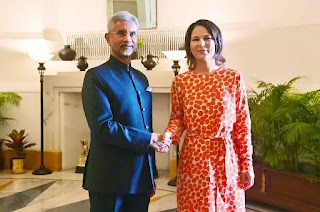 NEW DELHI (AP) — India will prioritize its own energy needs and continue to buy oil from Russia, its foreign minister signaled Monday, as Western governments press Moscow with a price cap to squeeze its earnings from oil exports.

Minister of External Affairs Subrahmanyam Jaishankar made the comments after holding talks with his visiting German counterpart, Annalena Baerbock, in which they discussed bilateral relations and Russia’s war in Ukraine. Jaishankar said it isn’t right for European countries to prioritize their energy needs but “ask India to do something else.”

“Europe will make the choices it will make. It is their right,” he told reporters.

India has so far not committed to the $60-per-barrel price cap on Russian oil set by the Group of Seven major industrialized countries and European Union that is expected to come into effect Monday. The move is an attempt by Western governments to limit fossil fuel earnings that support Moscow’s budget, its military and its invasion of Ukraine, while also avoiding a possible sharp price spike if Russia’s oil is suddenly taken off the global market.

Jaishankar did not make any direct reference to the price cap but said the European Union was importing more fossil fuel from Russia than India. Indian officials have defended buying oil from Russia, saying the lower price benefits India.

India and Russia have close relations and New Delhi has not supported Western sanctions on Moscow, even though it has repeatedly urged an “immediate cessation of violence” in Ukraine. India, also a major market for Russian-made weapons, has so far abstained from U.N. resolutions critical of Moscow’s war.

Jaishankar and Baerbock, who is in India on a two-day visit, also discussed a diversification of trade between the two countries, global consequences of the Russian war on Ukraine and cooperation in the energy transition away from fossil fuels.

The two countries also signed a migration and mobility partnership which will make it easier for people to study, do research and work in each other’s country.