New Round Of Peace Talks Between Ethiopia, Tigray Envoys 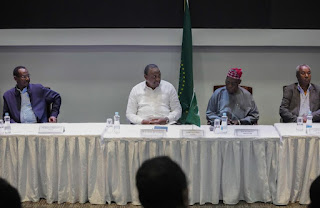 NAIROBI, KENYA (AP) — A new round of talks began Monday between Ethiopia’s government and Tigray regional representatives to work out military and other details of last week’s signing of a “permanent” cessation of hostilities in a two-year conflict thought to have killed hundreds of thousands of people.

The meetings in Kenya involve the military commanders of both sides along with the leading political negotiators. Issues to be discussed include how to monitor the deal, disarming Tigray forces and the resumption of humanitarian aid access and basic services to Ethiopia’s northern Tigray region, which has been cut off for months.

“Maybe by the end of this week or the middle of next week” humanitarian aid will be allowed to go in, the Ethiopian government’s lead negotiator, Redwan Hussein, told journalists. The Tigray lead negotiator, Getachew Reda, said the delivery of aid would increase confidence in the talks.

An official familiar with the talks hosted by the Kenyan government says they are expected to continue through Wednesday. The official spoke on condition of anonymity because they were not authorized to speak publicly.

Already, a communications channel has been established between the two sides to address any incidents “as both recognize the challenge of fully communicating with all their units to stop fighting,” the official said.

Kenyatta said they are “very hopeful next time we’ll be in (the Tigray regional capital) for our meeting” and that both sides will “ultimately celebrate together in Addis Ababa,” Ethiopia’s capital.

Over the weekend, the Ethiopian government’s lead negotiator told diplomats that “we’ve sustained colossal damage” and that the finance minister has estimated the country will require nearly $20 billion to rebuild. “We’ll quickly fix both telecoms and electricity soon” to the Tigray region, he said.

On humanitarian aid to a region where health workers and the United Nations and partners have reported even basic medical supplies running out, Redwan said that “the only hiccup we have is ... it is still risky to allow flights until commanders meet to assess the situation.”

If the military commanders agree on a timeline, the Ethiopian government believes that once the government controls the airspace and airports in Tigray fully, then “the entire Tigray region would be accessible for aid” by road and air, he said.

Neighboring Eritrea, whose forces have fought alongside Ethiopian ones, is not a party to the peace talks, and last week’s agreement doesn’t mention the country directly. Redwan in his briefing noted that Ethiopia’s borders and airspace had been violated during the conflict, “so we’re busy fighting each other, we’re busy undermining each other. That paved the way for a third party to undermine us further.”

He didn’t mention Eritrea but added that “we may also have a third party which may not be interested in this peace process.”

In his first public comment outside the talks, Tigray lead negotiator Getachew responded to questions from some Tigrayans about the agreement and his side’s silence. “We are fighting not because we are a trigger-happy nation but because our survival as a people is at stake,” he tweeted. “If a peace agreement can ensure our survival, why not give it a try?′
Africa African Union Ethiopia News Desk Tigray Region