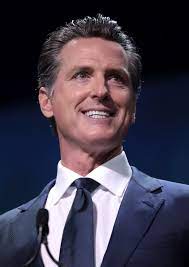 Gavin Newsom
BY JARED GANS
California Gov. Gavin Newsom (D) signed a bill Friday to limit the use of hip-hop lyrics as evidence in criminal trials amid multiple high-profile cases of lyrics being used against rappers who have been arrested.

The law, which Newson signed alongside rappers, record producers and record industry executives who were present virtually, is the first in the country to ensure someone’s “creative expression” is not used to “introduce stereotypes or active bias” against a defendant or be used as evidence in a trial against them.

It also requires courts to determine if song lyrics are admissible as evidence and whether content should be linked to an alleged crime.

This comes after Atlanta-based rappers Young Thug and Gunna were among two dozen people arrested earlier this year on charges of racketeering. The indictments against them reference lyrics from their hip-hop songs, and prosecutors allege Young Thug formed a street gang and promoted it through his music.

The legislation passed without opposition in the state Senate and state Assembly in August.

The law states that rap lyrics and other forms of creative expression can only create circumstantial evidence of motive or intent behind an alleged crime and introducing them into evidence creates a significant risk of unfair prejudice against a defendant.