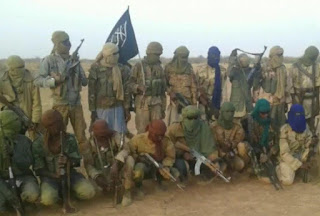 BY ARSENE KABORE AND SAM MEDNICK

The supply convoy escorted by the army was hit Monday while driving between Bourzanga and Djibo towns with one of the vehicles carrying civilians, the governor of Sahel region, Lt. Col. Rodolphe Sorgho, said in a statement.

The wounded have been evacuated and the area of the explosion has been secured, he said.

Although no group immediately claimed responsibility for the bomb, it is suspected to be by Islamic extremist rebels. Burkina Faso has been ravaged by violence linked to al-Qaida and the Islamic State group in which thousands have been killed.

This is the fifth explosion in Soum province since August, particularly around Djibo, which has been under siege by jihadis for months, according to an internal security report for aid workers seen by The Associated Press.

A double explosion last month between Djibo and Namssiguia killed at least 15 people, said the report.

A military coup in January ousted the country’s democratically elected government claiming they could better secure the country from the extremists.

Monday’s attack comes one day after interim President Lt. Col. Paul-Henri Sandaogo Damiba spoke to the nation saying the junta had achieved some progress in pushing back the jihadis.

“We have made many efforts since we came to power ... Our efforts have begun to bear fruit at the military operational level,” he said.

This latest attack, however, damages the credibility of Damiba’s claim, say analysts.

“Aside from the staggering casualty toll, the timing of the incident is unfortunate, given that only two days ago President Damiba made a speech in an attempt to convince the public that the country was making progress,” said Heni Nsaibia, senior researcher at the Armed Conflict Location & Event Data Project.

“While his speech was praised, many commentators criticized the lack of a balance sheet detailing the progress he claimed to have made,” he said.

While Burkina Faso’s military struggles to stem the extremist violence, the humanitarian crisis is escalating. Nearly 2 million people have been displaced — making it one of the fastest growing displacement crises in the world alongside Ukraine and Mozambique. More than 600,000 people are facing emergency hunger, creating the country’s worst food crisis in a decade, according to a statement this week by 28 international aid groups in Burkina Faso.

“Too often, displacement and hunger come as a one-two punch,” said Hassane Hamadou, country director of the Norwegian Refugee Council. “People forced to move have left behind their fields and livestock. Many displaced families report being down to one meal a day in order to allow children to eat twice.”

Residents say even if the junta has made gains, the country has a long road ahead to return to peace and stability.

“I am very sad,” Ousmane Amirou Dicko, the Emir of Liptako told The Associated Press. “Even if advances have been made in the past seven months, we do not yet have security.”