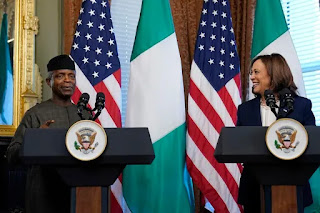 The Vice Presidents also discussed Nigeria’s complex security challenges and affirmed our cooperation to counter terrorism. Vice President Harris noted the importance of strengthening public trust in law enforcement institutions and highlighted the Biden-Harris Administration’s commitment to support police reform. To that end, she informed Vice President Osinbajo that the Biden-Harris Administration will commit an additional $5 million to support police and criminal justice reform in Nigeria. The two leaders also discussed the deteriorating security environment in the Sahel and agreed to continue to work together to address terrorism in the region.

In support of the United States’ strong bilateral relationship with Nigeria, Vice President Harris shared that the Administration intends to commit up to $627 million in bilateral assistance over the coming year, subject to congressional approval.