The Future Of Humanity? 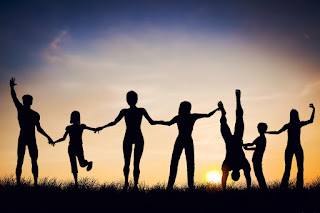 With America moribund and slouching toward dictatorship, and the international order collapsing, awakening human beings need to move to fill the vacuum at the global level, or all manner of authoritarianism will fill it at national levels.

Most people now realize that humankind is facing an unparalleled ecological and historical crisis, demanding a new way of thinking and feeling in a de facto global society. Politically, the United Nations, founded on the separate sovereignty of now around 200 nation-states, is imperiled, even as the necessity for effective global governance grows more urgent each month.

In the past, survival was the only issue. For billions of people today, it still is. But in rich countries like America, many have simply quit caring about anything except themselves. They don't count.

Though it has been said many times, it's unconscionable that there's so much poverty in a world of such wealth. The chasm between the haves and have-nots has to close, or humankind will descend into unending conflict.

Given new and rapidly emerging technologies, is the flow of insights and ideas radically changing thinking across the globe, or are people becoming even more tribal? The latter, obviously.

Boundaries truly do not matter anymore, but at this juncture of perilous transition, the future of humanity has never been in more doubt. And though it's a deep feature of human nature to believe there's always more time, Homo sapiens does not have an infinite number of chances to change course. Man is decimating the earth, and the earth will have the last say.

Obviously people can only survive and thrive in social settings, which are becoming dysfunctional all over the world. Our spiritual and intellectual potential for insight is eroding through unrestrained consumerism and a spreading cynicism about the human prospect.

In 50 years or less, computers will be able to run many of the functions of government that are now so susceptible to the corruption of venal politicians. Even so, contrary to creepy Elon Musk, who hates the earth and says, "I want to die on Mars," technology will not save us.

A true worldview, which looks out from one's locality and sees and feels for the earth and humanity as a whole, is the indispensable transformation each serious person has to bring about within.

Putting the local before the global, as so many privileged people in the West are doing, is increasing the fragmentation of the earth and humanity. What is the alternative? Counter-intuitively, seeing and acting first in terms of humanity as a whole enhances local flourishing, because diversity flows from wholeness, not particularity.

Do enough people emotionally perceive their inextricability from humanity as a whole over their nation, ethnic group or party? If so, a psychological revolution changes the disastrous course of humankind will ignite.

There has to be a practical political manifestation as well however. With the disintegration of the international order, the United Nations, based on the defunct premise of the supremacy of separate nation-states, is totally inadequate to meeting mounting global challenges.

The United Nations is necessary, especially in terms of its humanitarian agencies, but it certainly isn't sufficient. The UN can only be salvaged and radically reformed into a genuine institution of global governance if it is superseded by a new, genuinely global body, declaring and upholding the sovereignty of humanity.

Africa is the ultimate homeland of every human being, since both ancient and modern humans first emerged on that continent. Global citizens of the South and the North can now build a global polity of world citizens in Africa, in the evolutionary birthplace of humankind.

A Global Consultum will, first and foremost, signify and manifest a revolution in human consciousness. It will be a non-power-holding body, and will mark the end of the atavistic identification with particular groups as the source of security and basis of political organization.

A global polity will not serve or be founded on personal, particular or parochial interests. It will serve humankind by helping to fill the dangerous vacuum of leadership in the world, and function by holding national governments and international institutions accountable to the human prospect as a whole.

It isn't too late for the United Nations, but a Global Consultum needs to supersede in principle and complement in practice the UN, providing impetus to radically reform the General Assembly into an effective institution of international law and governance.

Building a Global Consultum of world citizens on the diverse, beleaguered continent of Africa will signify humankind coming full circle. Such a body of world citizens is not some distant dream. As nationalism and military/coercive power near their inevitable dead end, it's a tangible, essential and realizable vision.

The future does not belong to homogenized humans, 'virtual' prisoners of consumeristic mind control, but to awakening human beings. The future belongs to everyone who can look up from the muck and mire of the present world and still see the horizon that beckons for human beings.
READ ORIGINAL STORY HERE
Essay Human Rights News Desk