Our First Steps? Fossil May Boost Case For Earliest Ancestor 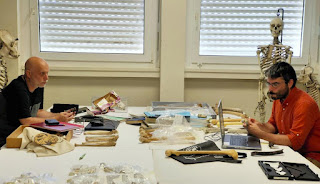 In this photo provided by the University of Poitiers in August 2022, researchers Franck Guy, left, and Guillaume Daver sit together at the PALEVOPRIM laboratory in Poitiers, France. Based on arm and leg fossils, scientists concluded that Sahelanthropus, an ancient hominin species from Chad, walked upright - which would add evidence that it’s the earliest human ancestor dug up so far, according to a study published on Wednesday, Aug. 24, 2022, in the journal Nature. (PALEVOPRIM/CNRS – Universite de Poitiers via AP)

NEW YORK (AP) — Twenty years ago, scientists discovered a 7-million-year-old skull that they concluded belonged to a creature who walked upright and was our earliest known ancestor. Not everyone was convinced. Now, the researchers are back with more evidence they say strengthens their case.

Their new study published Wednesday analyzed arm and leg fossils found near the skull in Africa, looking for signs of walking on two feet instead of on all fours. When early humans started walking upright, it marked a key moment in our split away from apes

In the paper in the journal Nature, researchers again place the creature just on the human side of that evolutionary divide. The fossil species, named Sahelanthropus tchadensis, walked upright while still being able to climb around in trees, they reported.

The species has been dated to around 7 million years ago, which makes it the oldest known human ancestor, by a long shot. That’s about a million years older than other early known hominins.

But it’s been a source of fierce debate since the fossils were first unearthed in Chad in 2001.

Researchers — also led by scientists at the University of Poitiers in France — initially looked at the fossil creature’s skull, teeth and jaw. They argued that the creature must have walked on two feet and held its head upright, based on the location of the hole in the skull where the spinal cord connects to the brain.

Other experts weren’t swayed by the early evidence.

The latest work includes a thighbone that was not linked to S. tchadensis at first and went unstudied for years. Other researchers at the French university found the bone in the lab’s collection and realized it probably belonged to the fossil species.

Compared to bones from other species, the thighbone matched up better with upright-walking humans than knuckle-walking apes, according to the study.

“There is not one feature. There is just a total pattern of features,” co-author Franck Guy said of their analysis at a press briefing.

Still, the debate over the species is likely to continue.

Ashley Hammond, a scientist at the American Museum of Natural History in New York said more research is needed to find the creature’s place on the evolutionary tree.

“I’m not fully convinced yet,” Hammond said. “This could still also be a fossil ape.”

Another researcher at the French university, Roberto Macchiarelli, had previously examined the thighbone and determined the species was probably an ape. Looking at the new study, Macchiarelli said he still doesn’t believe the species was a hominin, though it might have walked on two legs at times.

Rick Potts, director of the Smithsonian’s Human Origins Program, said the thighbone puts the species on “better footing” as a possible early human ancestor. But the real confirmation comes down to a common saying in the field: “Show me more fossils.”