‘I Lost everything’: Algeria Reels From Deadly Wildfire 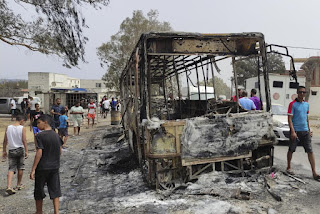 Residents walk past a charred truck in El Kala, in the El Tarf region, near the northern Algerian-Tunisian border, Thursday, Aug.18, 2022. Wildfires raging in the forests of eastern Algeria have killed at least 26 people, according to a "provisional report" by the north African country's interior minister. (AP Photo/Mohamed Ali)
Firefighters in Algeria have extinguished all but one of over 50 wildfires that ravaged the country this week, leaving at least 37 people dead and consuming farms, crops and cork forests, authorities said Friday.

“My livestock is lost as is the food for it,” he said. “I lost everything, really I have nothing left.”

Four people have been arrested on suspicion of setting fire to crops in El Tarf, the epicenter of the latest wildfires, according to the official news agency APS.

Algerian Prime Minister Aimene Benabderrahmane, visiting the scene Thursday, said the larger problem was the exceptional heat and winds fanning the flames across the North African region. Similar fires and extreme weather linked to climate change have hit countries around Europe this month.

“Today, around 4:00 a.m., we managed to put an end to all the outbreaks of fires across the country,” except for one in Skikda that is contained but not fully out, Farouk Achour, the communications director at Algeria’s civil protection service, said Friday on national radio. He listed more than 50 scattered fires.

In El Tarf, residents still in shock took stock of the damage.

“People died and nobody came,” said Hakim Bouachiha, a security worker at the Berabtia Zoo, describing a three-hour wait for emergency crews.

The death toll included a family of five found in their home, tourists visiting the coast and eight people on a public bus that was surprised by flames in a mountainous region.

El Tarf resident Mohamed Gefaifia described seeing a woman next to the bus “who had protected her children by covering them with her body, but she ended up dying, poor thing.”

Forensic experts are working to identify the dead and combing fire-afflicted areas to check if there are any more victims, civil protection officials said.

Friday’s weather was cooler but special end-of-summer concerts and cultural activities have been canceled because of the fires.

The Justice Ministry has set up a commission to investigate the source of the fires.