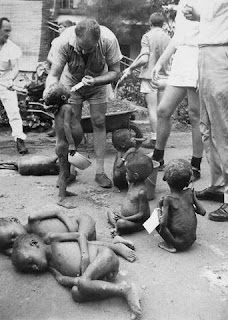 A volunteer worker feeds one of 500 children housed in a disused maternity home. Volunteers from the town's English community undertook caring for the children in need of care when they were brought in from the former Biafran Enclave January 23, 1970. Image: Bettmann

On July 6, 1967, the Biafra War began after the Nigerian army attacked this country, which had become independent a few weeks earlier. The tensions produced after decolonization pitted the inhabitants of southeastern Nigeria against the rest of the African nation and led to the constitution of an independent republic.

How was the Republic of Biafra?

A few days before this civil conflict broke out, this territory located in the south of Nigeria, in the Bay of Biafra, declared itself independent and was constituted as the Republic of Biafra, with its capital in Enugu. Almost 13 million people lived in this region, half of whom belonged to the Igbo ethnic group, who felt discriminated against by the Hausa majority. This new nation was only officially recognized by some African countries such as the Ivory Coast and Gabon, and by Haiti . He also received the support of France and two dictatorships: those of Portugal and Rhodesia. This last fact prevented him from getting more international recognition. Only Israel supplied it with weapons, while Nigeria reinforced its arsenal thanks to the great Western powers and the Muslim countries.
How was the Biafra War?
The unstable situation in Nigeria, which had suffered several coup attempts, was used by Odumegwu Ojukwu to declare the independence of Biafra. This was followed by one of the most devastating wars that took place in Africa and with terrible consequences for the population of this place. The Nigerian army started a war that in just three years left this region in the south of the country devastated. The internationalization of the conflict allowed both sides to have access to considerable weapons material that they did not possess until then. The end of the Biafra War brought with it a famine of great proportions. The total death toll — from disease, lack of food, and the shooting and bombing of Nigerian troops — is estimated to have been around one million people.

On July 6, 985 Almanzor took the city of Barcelona after besieging it.

On July 6, 1809, the Battle of Wagram continued for the second day, pitting the Napoleonic and Austrian troops against each other.

On July 6, 1997, the remains of Che Guevara are found in a mass grave in Vallegrande (Bolivia).
Paca Pérez was born in Burgos a year not too far from the 20th century. He studied History and writes stories.
READ ORIGINAL ARTICLE HERE
Biafra Nigeria Paca Perez The Pogrom United Nations