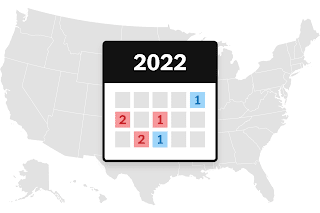 MUST-WATCH MIDTERMS — State legislatures increasingly shape American politics — from Covid to culture wars. In 2022 alone, statehouses have become the primary battlegrounds for abortion rights and gun legislation. But paramount among Democrats’ concerns is what the GOP domination of state legislatures — there are 30 states where the Republicans control both chambers — might mean for the 2024 presidential election.

Arizona, Michigan and Pennsylvania are among the states where President Joe Biden won most narrowly in 2020. And GOP legislative leaders in each of these three states tried to push officials to overturn the results in former President Donald Trump’s favor.

That’s why one Dem group, Forward Majority, is prioritizing state legislative races in these three states in 2022. It believes the 2024 presidential election is on the line in November 2022.

Forward Majority has identified 40 statehouse races, with the goal of winning 25 of them. Just that many could flip at least one chamber of the legislature in each of the three key states, according to the group’s analysis.

“I think we can all agree that there are very likely to be hotly contested and disputed election outcomes in battleground states in 2024,” co-founder Vicky Hausman said in an interview with Nightly. “Democrats must win state legislative power in key states to prevent the worst threats to election subversion.”

Since Hillary Clinton lost to Trump in 2016, Forward Majority has poured $50 million into these often underfunded state-level races, Hausman said, but not just for campaign purposes. Its strategists also use the funds to track down potential Democratic voters and add them to voter rolls in rural and suburban areas where these voters aren’t often targeted.

The group has identified more than 500,000 unregistered, likely Democratic voters in suburban and rural areas in Arizona, Michigan and Pennsylvania. These are areas where Democrats often lose but that are key to controlling state legislatures, Hausman said.

Hausman and David Cohen, an Obama campaign alum, founded Forward Majority in 2017 after Trump was elected president. The group has had some success so far, helping flip 65 state-level seats in Republican-controlled chambers across the country and win the chambers in Virginia, Hausman said.

Here’s a look at the statehouse races in these three must-watch states, with insight from Louis Jacobson’s analysis in Sabato’s Crystal Ball at the University of Virginia.

Arizona: In 2020, the balance of power in the state Legislature was determined by just 3,000 votes, according to Forward Majority’s analysis. The group has the goal of registering 16,000 likely Democratic voters in the state.

The Arizona Legislature also happens to be one of the most narrowly divided in the nation, according to Jacobson, who rates the battles for state legislatures. Democrats would need only one seat to move each chamber to a tie, and two seats to flip control in each chamber.

But redistricting helped Republicans, Jacobson says, and Republicans could gain seats in both chambers as a result. For Arizona, Jacobson rates both the Senate and House as “likely Republican.”

Pennsylvania: Like Arizona, Pennsylvania is a state where Trump’s cries of a rigged election have been nurtured by congressional and state legislators, as POLITICO’s Charlie Mahtesian wrote in Nightly a couple of weeks ago. In 2020, Statehouse control came down to 22,500 votes. Forward Majority is working to register 26,400 voters.

Even so, both the House and Senate will likely remain Republican, according to Jacobson. The breakdown right now is 113-90 and 28-20, respectively. Democrats have benefited from redistricting, but Jacobson says “a combination of incumbency effects and an advantageous cycle for Republicans make a partisan shift in control unlikely in 2022.”

Still, Michigan is a touch more promising for Democrats than Arizona and Pennsylvania are. An independent redistricting commission’s maps improved Democrats’ chances. Statehouse control was determined by 8,600 votes in 2020. Forward Majority is looking to register 9,800 voters this time around.