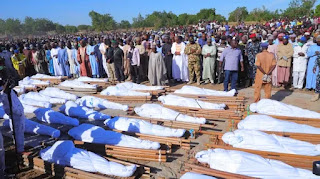 People attend a funeral for those killed by suspected Boko Haram militants in Zaabarmar, Nigeria, on November 29, 2020. Image: Jossy Ola/AP
Also slated to speak is Päivi Räsänen, a Finnish evangelical Christian and a member of parliament who continues to face charges despite winning a trial in Helsinki earlier this year. The state prosecutor appealed the not guilty verdict — something permitted in that country — and Ms. Räsänen fears the case may drag on for years.

According to Ambassador Sam Brownback, the former U.S. envoy for international religious freedom, the importance of religious liberty is “more out in the open now” as the summit convenes.

“I think, for years, the fight was mostly ignored or miscategorized,” Mr. Brownback said in a telephone interview.

He said the global community has come to realize that China’s persecution of its Uyghur minority isn’t merely Beijing’s attempt to “put down a restive population,” but rather the religious persecution of a Muslim group, “because communists don’t get along with religion.”

He added, “I think the situation in Ukraine has a lot of religious freedom implications, some of which get recognized, [although] a lot don’t.”

The global struggle for religious freedom, Mr. Brownback said, “continues, and it’s just more out in the open and people have more appropriately identified it.”

Nury Turkel, recently voted in as chair of the U.S. Commission on International Religious Freedom, told The Washington Times the IRF Summit is “extremely important.” He said he hopes the meeting will view religious liberty “in the context of national security.”

Mr. Turkel said, “The international community has been repeatedly making the mistake — specifically policymakers and liberal democracies — to wait until the religious persecution, human rights abuses reach the level of a humanitarian crisis to act. I think that’s a wrong approach; it’s a very costly approach.”

Instead, he said the world should take action before abuses turn “into a genocidal campaign with crimes against humanity.”

At the conference, he said, “I hope to use this platform in my official capacity to call on the policymakers to pay attention to some of the worst human rights abuses, religious persecution, namely in Nigeria and in India that should concern us and also the rise of antisemitism and Islamophobia in Europe, both [of which] have been ignored by European leaders.”

Mr. Turkel, an Uyghur who found refuge in the United States, said he is also concerned about the use of high-tech devices as a tool of oppression.

“I think that the international community is dealing with a new type of religious persecution and genocide that has been quietly tested, developed and now is promoted by communist China, which is the use of technology for religious persecution,” he said. “Today, more than 80 countries have either already adopted or are in the process of adopting Chinese surveillance technology techniques that are a threat to civil liberty, religious liberty, even democratic norms.”

Katrina Lantos Swett, a human-rights advocate and former USCIRF chair, has joined Mr. Brownback as a co-convener of the event. In an email, she said a goal of the conference is to draw attention to the persecuted.

She said she hopes the summit will “not only raise the profile of those communities that need our support but will help provide a roadmap for lawmakers and activists as to how to best mobilize their energies in defense of our most profound shared right — namely freedom of religion, conscience, and belief.”

“Above all, we want to carry forward the message that religious freedom is a force for good in our world and it is worth defending for everyone, everywhere, all the time,” she said.

Getting the public to think about religious liberty issues globally will be a challenge, said USCIRF Commissioner Frank Wolf, a veteran Republican member of Congress who focused on human rights during his years on Capitol Hill.

“I think we’re in a worse situation than we’ve been for a long, long time,” Mr. Wolf said in an interview. “There is less activity, fewer and fewer people are interested in or concerned with religious freedom issues internationally,” he added.