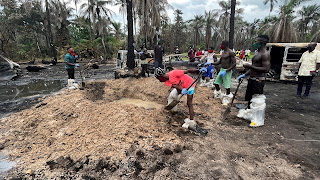 A person digs a grave for the mass burial of victims of the explosion at the illegal bunkering site in Imo state, Nigeria April 26, 2022. REUTERS/Tife Owolabi
BY CHINEDU ASIADU

OHAJI-EGBEMA, NIGERIA (AP) — Remains of more than 100 workers and traders who died after an illegal refinery exploded in southeast Nigeria were buried on Tuesday in an official ceremony after an incident that shocked the region.

Nigeria’s National Emergency Management Agency said at least 110 people had died in Friday’s explosion though officials believe the casualty figure could be higher.

“As the days go by, most people who think their siblings travelled will now realize maybe they are victims of this (explosion),” said Marcel Amadioha, chairman of the Ohaji-Egbema local government area where the illegal refinery operated.

Nigeria is Africa’s largest producer of crude oil and illegal refineries and oil bunkering activities have plagued the continent’s most populous nation for years.

Illegal refineries are “very widespread” in the West African nation mainly as a result of “the collapse of the system (with) poor security system and the lack of care for the pipelines,” said Nnimo Bassey, director of the Health of Mother Earth Foundation environmental group in Nigeria.

Nigeria’s security forces are still hunting for two suspects who have been blamed by authorities for the explosion. However, local officials, including chairman Amadioha, have accused security agencies of “sabotage” in the incident, saying they work with the operators of illegal refineries.

“They were so loose that the illegal bunkers will come here in their numbers without any kind of threat, not feeling like the police or security agencies will come,” the council chairman said of the security agencies. “There are some of them who are collaborators, who are sabotaging the efforts of the real ones trying to make sure this illegal bunkering stops.”

Nigeria’s police and military did not immediately respond to an inquiry for comments.

Tuesday’s event was a hurried but solemn burial that had been delayed for four days since the explosion on Friday as local authorities made efforts to arrange for vital equipment such as excavators.

Many of the victims’ bodies had been carried away and buried by families with just about 50 left at the refinery site for Tuesday’s mass burial, according to Bright Onyenwoke, a youth leader. “My heart bleeds,” he told The Associated Press.

Nigerian President Muhammadu Buhari has ordered the nation’s security forces “to intensify the clampdown” on such facilities being operated illegally in many parts of southern Nigeria, but there are concerns it would be a difficult task given insecurity in the area and a high rate of poverty.

In Imo state, many of those who worked at the refinery site did so “out of frustration,” according to youth leader Onyenwoke, who said the communities in the area are being marginalized despite having dozens of oil wells.

“There is no good road, no good water, no electricity,” he said, “so, the means of survival here is hard,” adding that sometimes taking part in illegal businesses becomes preferable.

Oramaru Kwintus with Nigeria’s disaster management agency said that authorities will “embark on more sensitization of the youths on the dangers of these dangerous activities.”
Associated Press Imo State News Desk Nigeria