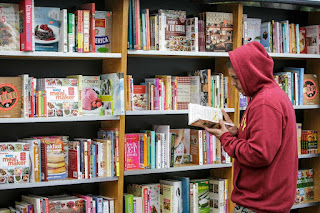 LOS ANGELES (NEWS USC) - The Book Prizes ceremony at USC’s Bovard Auditorium is a prologue to this weekend’s Los Angeles Times Festival of Books at USC, the nation’s largest literary and cultural festival.

he 42nd annual Los Angeles Times Book Prizes were awarded Friday night at the USC’s Bovard Auditorium. The Book Prizes are committed to literary excellence, championing new voices and celebrating the highest quality of writing from authors at all stages of their careers.

The Book Prizes ceremony is a prologue to this weekend’s Los Angeles Times Festival of Books, the nation’s largest literary and cultural festival. The event on the USC University Park Campus brings together more than 500 writers, musicians, artists and chefs, hundreds of exhibitors and an estimated 150,000 attendees each year.
Other winners of the Los Angeles Times Book Prizes

• Current Interest: Adam Schiff, Midnight in Washington: How We Almost Lost Our Democracy and Still Could, Random House.

• Fiction: Véronique Tadjo, In the Company of Men, Other Press.

• Graphic Novel/Comics: R. Kikuo Johnson, No One Else, Fantagraphics.

Visit the Times’ Book Prizes website for more information about the Book Prizes, including the complete list of 2021 finalists and previous winners; eligibility and judging information; and how to make a tax-deductible donation in support of the annual literary awards.
Book Shelf Los Angeles Times USC