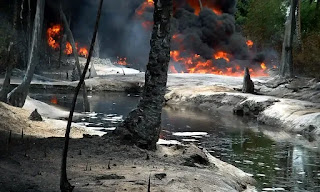 Oil from a leaking pipeline burns in Goi-Bodo, a swamp area of the Niger Delta. Poverty in the region has made illegal crude refining an attractive business but with deadly consequences. Photograph: Reuters
BY CHARLES IGBO

OHAJI/EGBEMA LGA, IMO (THE SOURCE) - Hell has literally descended on Imo State. In one fell swoop, over 100 youths were burnt to death, thus reducing the Ohaji/Egbema Local Government Area of the State to one huge venue for wailing and cemetery.

The youths met their sudden death when an illegal refinery owned by one Okenze Onyewoke where they were working exploded, and burst into hellish flames.

The circumstances which triggered the explosion Friday is not known yet. But the owner of the illegal business who has disappeared into thin air has been declared wanted by the Imo State Government.


The illegal refinery, is located at the Abaeze forest in the Ohaji Egbema LGA. As at the time of this report, the whole area was littered by scores of charred bodies. They were unrecognizable.

Anguish and wailing have taken over the LGA, as hundreds of people thronged the scene looking for their relations.

The Imo State Commissioner for Petroleum Resources, Goodluck Opiah, who rushed to the scene was shocked at the number of fatalities. Lamenting the tragedy, Opiah, a native of the LGA, and a former Speaker of the Imo House of Assembly, said: “At the moment I can’t really confirm the number of the deceased because many family members have removed the corpses of so many others.”

Aside from the fatalities, Opiah lamented the other side effects of the explosion. Opiah: Apart from this calamity, the act has destroyed the aquatic life of the community. Our people, before now, are predominantly farmers and fishermen. Look around, you will find smoke coming from this illegal act. If this is not enough for anybody to stop, I think the community is heading for what I can’t describe.”


The Commissioner blamed Indigenes of neighboring Rivers and Bayelsa States for the deadly business.

He revealed: “Most of the people who are engaging in this act are from Rivers, Bayelsa and other neighboring States.”

He condoled with the people, on behalf of the Imo State Government, and advised Youths to engage in some other legal businesses than illegal ones.

Most of the youths, however, engage in it as a last resort because of the high unemployment rate in the country.
Imo State News Desk Oil Pipelines