CANADA: Is There A Doctor In The House? Siblings Choose Careers As Surgeons, Land At Southlake 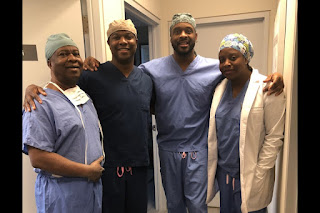 ONTARIO, CANADA (BARRIE TODAY) - If you're a patient at Newmarket's Southlake Regional Health Centre and you ask to speak with Dr. Ayeni, the response might be "which one?"

That's because on any given day, there may be three Dr. Ayenis to choose from and all three are plastic surgeons.

Of five Ayeni siblings, four are surgeons and three practise at the York Region hospital. The fourth is academic head of orthopedic surgery at McMaster University in Hamilton.

Bimpe Ayeni, head of plastic surgery at Southlake, is the middle child and the first to practise at Southlake. When she arrived in 2011, the position was meant to be temporary to cover for someone on leave, but she never left.

"One by one, we all just kind of found Southlake and loved it," she says.

Prior to the pandemic, before he retired, Femi, the patriarch of the family, assisted his kids during surgery. (For those keeping count, that's four Dr. Ayenis at Southlake.)

"They have met so many people who still remember them and I think that speaks to who they are as people and the impression that they leave... they're just really lovely people," says Claire Jones, manager of marketing and communications for Southlake Regional Health Centre Foundation.

Ayeni said her parents never pushed their kids to follow in their dad's footsteps and pursue careers in medicine. Education was non-negotiable, she says, but the only rule was that each child obtain at least one degree.

"No matter what you do, you just really have to work hard at whatever it is you're interested in," she says. "It's just funny that one by one we picked medicine."

The Ayenis arrived to Montreal from Ilorin, Kwara State, Nigeria in 1973 so Femi could study medicine at McGill University.

According to Ayeni, as a university-level teacher of linguistics and French, her mother, Titi, thought being in the French-speaking province was a "wonderful" opportunity.

After completing his studies, the family returned to Nigeria. Femi helped create a medical school and Titi taught, but after seven years, due to instability in the West African nation, the Ayenis decide to return to Canada, settling in Kapuskasing, Ont.

Montreal-born Bimpe was just a year old when the family left Canada, so the move back was a difficult adjustment on many levels, she says, because the northern Ontario town was the polar opposite of the big city she was used to — "Plus 40 C, minus 40 C; sun, snow; big city, small town."

And then came winter.

"We were like, 'Whoa, this stuff doesn't stop coming down'."

Though the family were the only West Africans in town, the residents of Kapaskasing could not have been nicer, Ayeni says, and they went out of their way to welcome the family and make their transition as seamless as possible.

Ayeni remembers the respect and admiration given to her dad as the only surgeon in town and the "important community role" he had.

"We thought 'we could have a job where we have this level of satisfaction that everybody seems so appreciative? That sounds pretty amazing, to have an opportunity to have a positive impact and influence on people's lives.'"

Those memories of a childhood spent in a small community left an indelible mark on Ayeni. Having trained in major cities like New York and Boston, it was shadowing her dad during his practice that she loved the most.

"There's something special about small communities... something in the back of my mind always liked the idea of having a community-based practice and when that opportunity came up, I jumped at it," she says of the position at Southlake.

Ayeni says it's unusual that most of her siblings chose to pursue medicine because they all have such different personalities and interests, but they all get along and she loves working "just down the hall" from her two brothers.

Growing up, whenever the siblings would fight, Titi would say, 'You know, you guys, all you have is each other and one day you're going to look back and miss the time you spent together.' Now I look back and think 'yup, she was right'."

Their shared experiences growing up helped all the siblings appreciate one another and think of themselves as a team and while she may be the middle child in the family, at Southlake she is the eldest — a fact she doesn't allow her younger brothers to forget.

"I'll remind them every so often, 'Hey I'm the oldest one here, which makes me the boss'."
Canada Essay News Desk Nigeria