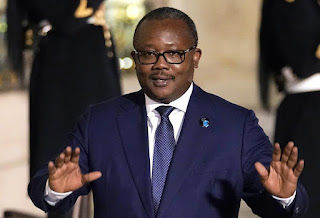 FILE - President of Guinea-Bissau Umaro Sissoco Embalo arrives for a dinner at the Elysee Palace as part of the Paris Peace Forum, in Paris, Nov. 11, 2021. Heavy gunfire erupted Tuesday Feb. 1, 2022 near the Government Palace in Guinea-Bissau's capital, witnesses said, raising fears of a coup attempt in this West African country with a long history of military takeovers. (AP Photo/Michel Euler, file)
BY VAGNER BARBOSA

BISSAU, GUINEA-BISSAU (AP) — Assailants armed with machine guns and AK-47s attacked Guinea-Bissau’s government palace for hours Tuesday while the president and prime minister were inside, but the coup attempt that ultimately failed, the president announced.

The foiled attack came only about two weeks after a military junta overthrew the democratically elected leader of Burkina Faso, underscoring fears that a recent spate of coups is inspiring others in the region.

President Umaro Sissoco Embalo addressed reporters late Tuesday, saying that the “attack on democracy” had come during a government meeting at the building.

“Our republican defense and security forces were able to stop this evil,” Embalo said, adding that the gunfire went on for five hours.

It was not immediately clear who was behind the assault, though the president said it “also has to do with our fight against narco-trafficking.” Guinea-Bissau became known as a transit point for cocaine between Latin America and Europe in the 2000s as traffickers profited from corruption and weak law enforcement.

The 15-nation West African regional bloc known as ECOWAS, already grappling with three other coups in member states over the last 18 months, called Tuesday’s violence a coup attempt and said it was following the situation in Bissau “with great concern.” Portugal’s Foreign Ministry said in a tweet that it strongly condemned the attack in its former colony.

Since gaining independence from Portugal in 1974, Guinea-Bissau has experienced four coup d’etats and more than a dozen attempted coups.

Embalo, a former army general, was declared the winner of the December 2019 runoff vote, though the results were contested by his opponent. Embalo then started forming a new government with support from the military while a Supreme Court election challenge was still pending.

Tuesday’s coup attempt comes amid a wave of military takeovers in West Africa. Since August 2020, soldiers have grabbed power in Mali, Guinea and Burkina Faso. Despite international pressure for a return to constitutional rule, none of the military rulers have yet to organize new elections.

U.N. Secretary-General Antonio Guterres, speaking to reporters at U.N. headquarters in New York, condemned the “terrible multiplication of coups” in the region, which he called “totally unacceptable.”