EU Warns Mali, Sahel States Over Use Of Russian Mercenaries 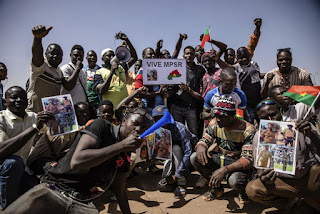 FILE - People take to the streets of Ouagadougou, Burkina Faso, Jan. 25, 2022 to rally in support of the new military junta that ousted democratically elected President Roch Marc Christian Kabore and seized control of the country. Officials from the European Union and five countries of the north African Sahel region are meeting as the bloc readies to impose sanctions on Mali and as political turmoil roils Burkina Faso. The meeting Wednesday, Jan. 26, 2022 brings together EU foreign policy chief Josep Borrell and foreign ministers from Chad, Mali, Mauritania and Niger. (AP Photo/Sophie Garcia, file)
BY LORNE COOK

BRUSSELS (AP) — The European Union on Wednesday warned countries of the north African Sahel against hiring Russian mercenaries, and underlined that it stands ready to impose sanctions on anyone interfering with the transition to civilian rule in Mali.

Mali’s interim government has accepted the presence of Wagner Group security contractors on its territory. Last month, the EU slapped sanctions on eight people and three oil companies linked to Wagner, which is accused of rights abuses in the Central African Republic, Libya and Syria.

The EU warning came in a series of meetings between the bloc’s foreign policy chief, Josep Borrell, and the foreign ministers of Chad, Mali, Mauritania and Niger. A full meeting of the G5 Sahel countries, including Burkina Faso, did not take place due to differences over who could take part.

Borrell said he underlined the EU’s “deep concern following the confirmed deployment of Russian mercenaries in Mali and the great danger that this poses to civilian populations. This group’s methods are incompatible with our collective efforts on security and development.”

In a long conversation with Foreign Minister Abdoulaye Diop, Borrell insisted that “the European Union wants to remain engaged in Mali and the Sahel but not at any price.”

Of chief concern for the Europeans in the strategically important but unstable Sahel region, which has proven a fertile breeding ground for extremists, is the decision by Mali’s interim government to delay elections due next month until 2026.

The West African regional group ECOWAS imposed tougher economic sanctions on Mali in response. The EU has set up a framework for imposing its own measures on the authorities for holding up the political transition but has not yet pulled the trigger.

Mali has struggled to contain an extremist insurgency since 2012. Rebels were forced from power in northern cities with the help of a French-led military operation, but they regrouped in the desert and began attacking the Malian army and its allies.

Insecurity has worsened with attacks on civilians and United Nations peacekeepers. The EU has also been training the Mali armed forces and plans to continue to do so for now despite the severe instability and political upheaval.

Borrell said he demanded “concrete guarantees” from Diop to ensure that European help to Mali’s security forces can continue. He called for a “credible electoral timetable” and said the EU “is united in its position to impose individual sanctions on those who hinder the transition process in Mali.”

Burkina Faso’s takeover this week by the Patriotic Movement for Safeguarding and Restoration was also high on the meeting agenda. Borrell condemned the coup and underlined that the EU demands “the respect of the republic’s institutions and a rapid return to constitutional order.”

He also called for “the immediate release of all people who are illegally detained, to start with President (Roch Marc Christian) Kabore himself.”