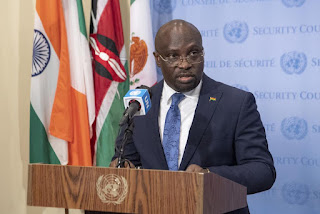 
UNITED NATIONS (AP) — The U.N. Security Council got five new members Tuesday, as Albania, Brazil, Gabon, Ghana and the United Arab Emirates formally took up the posts they won in an election in June.

Ambassadors made brief remarks, installed their countries’ flags alongside those of other members outside the council chambers, and posed for a group photo — wearing face masks and standing apart, in an acknowledgment of the ongoing coronavirus pandemic. The flag ceremony is a tradition that Kazakhstan started when on the council in 2018.

The 15-member council is the U.N.’s most powerful body. China, France, Russia, the United Kingdom and the United States are permanent members, with veto power.

Other members are elected by the 193-member General Assembly for staggered, two-year terms that are allocated by global regions.

Countries often campaign for seats for years. Winning gives them a say on peacekeeping missions and the council’s other approaches to conflict hotspots, plus a strong voice on overarching issues of international peace and security.

Council members also can convene meetings on security topics of particular interest to them, and smaller countries get to share a prominent platform with world powers.

Albania is joining for the first time, while Brazil is taking an 11th turn. Gabon and Ghana each have been on the council three times before and the UAE once.

More than 50 of the U.N.’s 193 member countries have never been elected to the council since it formed in 1946.
Africa Associated Press News Desk United Nations