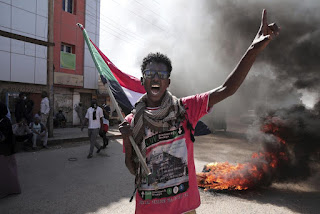 Thousands rallied since earlier in the day, even as authorities tightened security across Khartoum, deploying troops and closing all bridges over the Nile River linking the capital with its twin city of Omdurman and the district of Bahri, the state-run SUNA news agency reported.

Authorities had warned protesters against approaching “sovereign and strategic” sites in central Khartoum — a reference to main government buildings and key institutions. The city’s Security Committee said Sudanese forces would “deal with chaos and violations,” SUNA had reported.

The marches started in different locations, from where the protesters meant to converge on the presidential palace. Security forces used tear gas to disperse those attempting to approach the palace, said activist Nazim Sirag. There were no immediate reports of injuries.

Rallies were also underway in other cities, including Wad Madani and Atbara.

Last weekend, security forces violently dispersed demonstrators when they attempted to stage a sit-in near the presidential palace. At least three protesters were killed, and more than 300 were wounded on Sunday. There were also allegations of sexual violence, including rape and gang rape by security forces against female protesters, according to the United Nations.

Volker Perthes, the U.N. special envoy for Sudan, urged security forces to “protect” the planned protests, and refrain from arresting people for simply wanting to take part in the demonstrations.

“Freedom of expression is a human right. This includes full access to the internet. No one should be arrested for his or her intention to protest peacefully,” he said in a Twitter post.

Ahead of the demonstrations Saturday, activists reported disruption of internet access on phones in Khartoum, a tactic that had been used by the generals when they seized power on Oct. 25.

The October military takeover upended a fragile planned transition to democratic rule and led to relentless street demonstrations across Sudan. At least 47 people were killed and hundreds wounded in protests triggered by the coup, according to a tally by a Sudanese medical group.

Prime Minister Abdalla Hamdok, a former U.N. official seen as the civilian face of Sudan’s transitional government, was reinstated last month amid international pressure in a deal that calls for an independent technocratic Cabinet under military oversight led by him.

That deal, however, was rejected by the pro-democracy movement, which insists that power be handed over to a fully civilian government tasked with leading the transition.

The prime minister is continuing discussions on finding a way out of the political deadlock. He met Friday with leaders of the country’s largest Umma Party, his office said.
African Union AP News News Desk Sudan