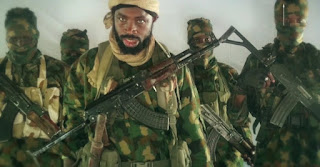 
Nigeria’s all-or-nothing fight against the Boko Haram Islamic sect which has raged for more than a decade now has left a lot of blood in its wake.A few days back,the blood of the Adamawa State Chairman of the Christian Association of Nigeria joined the blood bath much to the horror of Nigerians, especially Christians who are beginning to feel especially targeted by the evil sect.

But Boko Haram`s bloodlust has hardly spared anybody. Such has become its notoriety that Nigerians have come to accept terrorist killings and acts as part of their daily news bulletin, whether the media is print or broadcast.Terrorism has grown in depths and daring around the world for decades now,and gradually but steadily, it has come to occupy front row in in the spectrum of problems that confront countries as single entities, and the world at large as one global village.

Even when they claim to be genuine freedom fighters,the lines between genuine struggles for freedom and an unbridled lust for chaos and revenge are usually blurred by the senseless slaughter and destruction.Nigeria has faced up to this nightmare for years now and how the country has fared in the brutal war against terror would get its most credible assessment from those who have been caught in the brutal crossfire between the Boko Haram criminals and soldiers defending the Nigerian people and the territorial integrity and sovereignty of the Nigerian nation.

There are also the health and humanitarian aid workers.These people,hearkening to the cry for help of those they share a common humanity with,risked life and limbs to alleviate their suffering.Those lives and limbs have not been spared; some of them have been killed; some have been abducted.

There are also the gallant Nigerian soldiers; young,able-bodied men called to defend their fellow countrymen and their country have hurried to the war zone,carrying arms.Some of them have been cut down, and ruthlessly too,torn away from their families at their prime.

Boko Haram continues to be a nightmare, and if patterns around the world are to provide lessons for the discerning,it is a nightmare that is far from over. Terrorism has shown itself to be a menace that is notoriously difficult to put down. It has a way of evolving and devolving. It has an eerie ability to survive and take on new and far more dangerous forms.

The battle must continue. It is anything but over. The Nigerian government must continue to lead the battle with sincerity and transparency. Nigerians must continue to offer their undiluted support, for if this battle, which is threatening to break up the country in new ways is to be won, all hands must be on deck.