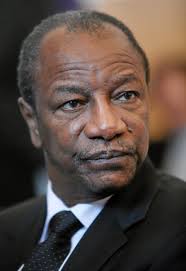 
Five opposition and civil society leaders in Guinea have been sentenced to prison for organizing protests against a possible change to the constitution that could let President Alpha Conde seek a third term.

Abdourahmane Sanoh, a former government minister and an organizer of the protests, received a one-year jail term for inciting civil disobedience.

Four other members of the National Front for the Defence of the Constitution (FNDC), received six-month sentences while three others were acquitted.

Both the defense and the prosecution, which had been seeking five-year sentences, said they are planning to appeal the sentence.

Last month, 81-year-old Conde, whose second and final five-year term expires next year, asked his government to look into drafting a new constitution, a move his opponent fears will enable him to seek re-election.

During last week’s demonstrations in the capital Conakry and several opposition strongholds in the north, police opened fire on protesters as they raided military posts and blocked roads with burning tyres. At least nine people were killed in the clashes.