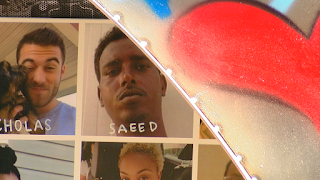 Saleh, his wife and their daughter came to America to escape oppression and violence in Africa, only for Saleh to be gunned down in the place he thought his family would be safe.

"I wish he would have come back among the wounded, and if he had come wounded, I would have been happy," a family friend translated for Essayas.

Last Saturday was a rare night out for the husband and father.

"He said he was going to go and meet his friend and he'll be back shortly and then never came back," Essayas said.

She hasn't been able to find the words to tell their daughter she'll never see her father again.

"She keeps asking her, 'Where is my dad? Give him a call. Isn't he finished working?'" Essayas said.

Saleh fled Eritrea in east Africa for a refugee camp in Sudan. That's where he met Zaid. From there, the two went to Libya then Malta. That’s where their daughter, Randa, was born. Then, they came to the United States as refugees.

"She says that her husband was a very loving person, gets along with everybody and he's always helped other people, and he was a very down-to-earth person," Essayas said.

"It's so meaningful to be able to present these to these families who have fled oppression, fled terror and come to the United States seeking refuge, seeking a new life. And to be able to present a new green card to an applicant, to me, is a recognition that you are now part of this country," Portune said.

Portune has been working with Catholic Social Services to help families like Saleh's get their green cards.

"He was an impressive man, and it is just so sad and so tragic that he came here. He and his family now have to endure what happened to him," Portune said.