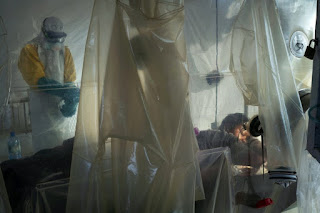 In this July 13, 2019 file photo, health workers wearing protective gear check on a patient isolated in a plastic cube at an Ebola treatment center in Beni, Congo. Congo's year-long Ebola outbreak has spread to a new province, with two cases, including one death, confirmed in South Kivu, according to the government health ministry. (AP Photo/Jerome Delay, File)

KINSHASA, CONGO (AP) — Congo’s year-long Ebola outbreak has spread to a new province, with two cases, including one death, confirmed in South Kivu, according to the government health ministry.

The movement of the potentially deadly disease to a new province highlights the difficulties that health workers in Congo face in controlling the outbreak.

Two new patients tested positive in the Mwenga area of South Kivu, adding to North Kivu and Ituri provinces where there are confirmed cases of the disease, according to the health ministry.

The new cases are “a 24-year-old woman and her 7-month-old child,” said Dr. Jean-Jacques Muyembe, the director of Congo’s National Institute for Biomedical Research, in a statement released on Friday.

The local Ebola response team has identified more than 120 people who may have been infected with the Ebola virus by contact with the woman and her child. Those people will be vaccinated to reduce the risk that they will get Ebola.

The Ebola outbreak in eastern Congo has killed 1,808 people out of 2,765 confirmed cases, according to the new report. The current outbreak, which started on Aug. 1 last year, is the second largest in history.

The spread of confirmed cases to a third province shows that health workers have struggled to contain the outbreak, despite the use of a vaccine. Many people in eastern Congo do not trust doctors and other medics.

An average of 81 new cases of Ebola are confirmed each week, according to the World Health Organization, which issued an update on the outbreak Friday. WHO said that its appeal for $287 million to fund the public health part of its campaign to control this outbreak has only received $15 million so far.

Earlier this week, doctors announced positive news that two new drugs appear to be effective at saving lives of those who fall ill with Ebola.

Muyembe and other scientists announced that preliminary results from a trial in Congo found two drugs — made by Regeneron and the U.S. National Institutes of Health — seem to be saving lives. Researchers said more study is needed to nail down how well those two compounds work. The drugs are antibodies that block Ebola. In the trial, significantly fewer people died among those given the Regeneron drug or the NIH’s, about 30%, compared to those who received another treatment.

There is less danger that Ebola will spread through Goma, the capital of North Kivu province with more than 2 million inhabitants, because about 200 contacts and suspected cases have been identified and have received proper medication, said Muyembe. He said people arriving in Goma are being monitored at the city’s entry points.

Health officials have also vaccinated tens of thousands of people in Congo and surrounding countries in an attempt to stop the outbreak, but the virus has now continued to spread for more than a year. Response efforts have been repeatedly hampered by attacks on health workers and continuing mistrust among the affected communities; many people in the region don’t believe the virus is real and choose to stay at home when they fall ill, infecting those who care for them.

Maliro contributed to this report from Beni, Congo. 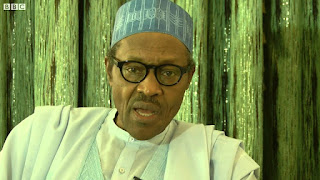 
I am not a usual letter writer, and I must admit, I barely complain for many reasons. It would make no sense to complain since nobody likely would listen, especially you, Buhari, knowing you for your extreme views and the preservation of Islamic fundamentalism, and your utmost desire to silence the press from around which you have a track record as a junta, remember?

It's not that you're so powerful and tough as permanently battered Nigerian citizens may seem to believe; it's just that you've taken advantage of what made you a junta, in the first place, when your colleague of juntas wrestled power and dissolved the 2nd Republic, positioning you as "head-of-state", a figure head, and besides, Tunde Idiagbon, who sat as your side kick and made draconian laws which covered you up and saved you the embarrassments of a weakling soldier from the public eye, and only if they had known you were nothing… 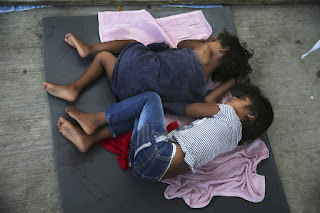 In this July 17, 2019, file photo, migrant children sleep on a mattress on the floor of the AMAR migrant shelter in Nuevo Laredo, Mexico. A federal judge rules that the Trump administration is operating within its authority when separating families stopped at the Mexican border, rejecting arguments that it was quietly returning to widespread practices that drew international condemnation. (AP Photo/Marco Ugarte, File)

SAN DIEGO (AP) — A U.S. judge ruled Monday that the Trump administration is operating within its authority when separating families stopped at the Mexico border, rejecting arguments that it was quietly returning to widespread practices that drew international condemnation.

The American Civil Liberties Union argued that the administration was splitting families over dubious allegations and minor transgressions including traffic offenses. 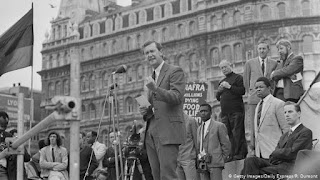 Protesters march from the former Soviet Union's Embassy in London to the office of the Prime Minister on Downing Street. They argued that the Soviet Union and Britain supported Nigeria's war on Biafra and arms trafficking to the Nigerian federal troops. Labor Party politician Michael Barnes also spoke at a meeting organized by the Biafran Committee in London. Image: R. Dumont/Daily Express/Getty

They were, however, unanimous that Nigeria must avert another Civil War.