Scaramucci: Trump's Attacks On Congresswomen 'Against The Idealistic Values Of America' 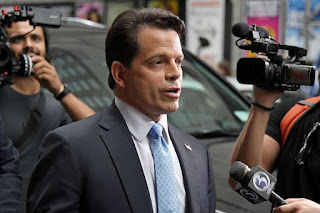 But Scaramucci also warned the president will hemorrhage “a glacier of support” during his 2020 reelection bid if he refuses to cool his rhetoric, which the ex-Trump aide denounced as antithetical to the nation’s values.

“They won last time, so it may be a winning campaign strategy, but it is against the idealistic values of America,” Scaramucci told CNN.

“And so what ends up happening,” he continued, “is it's such a turnoff to a large group of people that you are running a risk that 15% of the people that you want to get you through that electoral map and back into the presidency say, 'You know what? I love the policies, but I don't like the “send her back” rhetoric. I don't like the racist rhetoric of sending people back to the homes that they came from.’”

The president this week has steadily ramped up his incendiary criticism of the quartet of high-profile freshman House members and women of color — Reps. Alexandria Ocasio-Cortez (D-N.Y.), Ilhan Omar (D-Minn.), Ayanna Pressley (D-Mass.) and Rashida Tlaib (D-Mich.) — since first tweeting Sunday that they should "go back and help fix the totally broken and crime infested places from which they came."

Three of the four lawmakers — Ocasio-Cortez, Pressley and Tlaib — were born in the U.S. and Omar, a refugee from Somalia, has been a citizen since she was 17.

Trump continued the verbal onslaught at a campaign rally Wednesday evening in North Carolina, goading the the assembled crowd at Greenville’s East Carolina University to break out in chants of “send her back.”

Scaramucci, who insisted Thursday that he still supports the president, said he would like for Trump “to conform that behavior” and alleged that “he has friends of his in the White House that are working for him that are telling reporters that these tweets are racist.”

Scaramucci cautioned: “If he continues on that path, he's going to lose like a glacier of support [that] is going to break off and float away from him in a way that he doesn't fully understand."
Alexandria Ocasio-Cortez Ayanna Pressley Ilhan Omar Newsroom Politics Rashida Tlaib