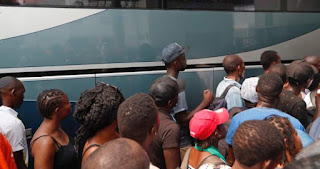 A July 5 Reuters report documented the journey of a migrant from the African nation of Cameroon who crossed nine national borders to reach Mexico on the way to the United States. A map illustrating the report depicted her journey by plane from Lagos, Nigeria, to Quito, Equador. From there, she traveled by land through Colombia, Panama, Costa Rica, Nicaragua, Honduras, and Guatemala, before arriving in Mexico. The report observed that a record number of fellow Africans are flying to South America, and then traveling long distances to reach the United States.

Our online research found the cost of flights from Lagos, Nigeria, to Quito Ecuador to be $1,466 and higher — a considerable sum for a refugee from Africa.

In our article on July 1 (“Illegal Aliens From Africa and Haiti Among Those Crossing Rio Grande”), we cited reports from Customs and Border Protection (CBP) in June noting that illegal aliens crossing our southern border are not just Mexicans and Central Americans, but also included groups from Haiti and Africa.

The Reuters report noted that the number of Africans registered by Mexican authorities tripled in the first four months of 2019 compared with the same period a year ago, reaching about 1,900 people. Most of these were from Cameroon and the Democratic Republic of the Congo (DRC).

A July 2 report from Texas Monthly took a look at refugees at San Antonio’s Migrant Resource Center. The report stated that from just June 4 to June 18, about four hundred migrants from Angola and the Democratic Republic of Congo arrived at the center. The report cited Border Patrol figures showing that during the first two weeks of June, the Border Patrol detained 740 African migrants in the Del Rio sector. For comparison, just 211 African migrants were apprehended at the U.S.-Mexico border in all of 2018.

Texas Monthly did not provide details about the legal status of the migrants from Africa, but references in the article suggest that many are here illegally. The report noted:

In mid-June, as President Trump tweeted out his plans to deport thousands of undocumented immigrants, [an Alliance Francaise volunteer working with migrants] broke down in tears. One of the asylum seekers she had helped get to family in Brooklyn called her sobbing after hearing about the proposed raids on TV. His family members are undocumented and were afraid to risk staying in the U.S. Ultimately, he and his brother decided to leave for the Canadian border.

A July 9 Breitbart report cited Del Rio Sector Border Patrol agents who reported the apprehension of more than 1,000 migrants from Haiti who illegally crossed the Rio Grande since June 10, according to information provided by Border Patrol officials. Of those, more than 800 were composed of Family Unit Aliens (FMUA). It appears many of these Haitian migrants moved years ago from Haiti to Brazil and Chile and have now decided to migrate again to the United States, possibly to blend in with the current flood of migrant families crossing the border.