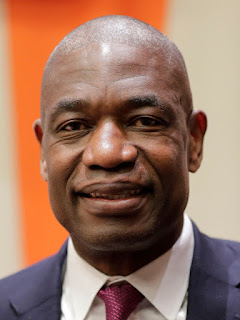 LUANDA, ANGOLA (VOA)  —  Africa's professional basketball league, due to be launched in 2020, is expected to be a showcase for new talent. With the support of Africa-born former professional stars like Dikembe Mutombo, young talent already have the incentive to step up their game.

Sitting on the benches at Kilamba Arena, former NBA star and Hall of Famer Dikembo Mutombo was helping set up a National Basketball Association-supported clinic, to train and observe new talent in Luanda, the capital of Angola, where he made a visit in May and spoke to the young players.

Mutombo is following his roots, as he was born in and grew up in Kinshasa, a 45-minute flight from Angola, before he became an NBA all-star.

"I think my presence means a lot to these young people who are playing the game here, that I am still caring about them. We are following them and we want them to succeed and we want the game of basketball to continue to grow in the continent,” Mutombo said.

The clinic was organized by Will Voigt, an American basketball coach, who is now coaching the Angola national basketball team. After training Nigeria's team, he is helping Angola to build the next generation of players. He instructs and gives guidance to local coaches and young players.

"We are trying the best as we can to give them a fair opportunity to learn and grow. We already have seen what players from the continent can do when given them,” Voigt said.

Olumide Oyedeji, one of the former NBA players who came with Mutombo, believes that African basketball is growing and that it has overcome the times when the game was dominated by a few countries, like Angola and Egypt.

He hopes one day an Africa national team might reach the FIBA world top 10.

"We have a chance; we just need to keep playing and getting better, beside the fact that it must start with each step. I believe we are taking the right steps,” Oyedeji said.

Now FIBA-Africa is getting ready to launch the first Pan-African professional basketball league with support from the NBA. Anibal Manave is the newly appointed president of the board for the Basketball Africa League, or BAL.

"The concept for this is African. It is not a national, but African awards. That is why we give the opportunity for the countries to have, apart from foreign players, African players as well,” Manave said.

The new BAL is scheduled to begin play in January with 12 club teams from across Africa.

The teams will be chosen through regional competitions and the top teams will advance to the BAL.
Africa Dikembe Mutombo Newsroom Society Sports