Poll: Majority Oppose Trump Impeachment, But Most Democrats Support It 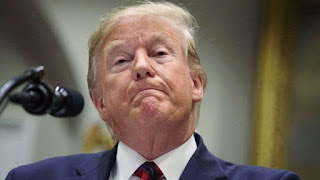 BY JONATHAN EASLEY
THE HILL


A majority of voters oppose impeaching and removing President Trump but a strong majority of Democrats are in favor of doing so, according to the latest Harvard CAPS/Harris Poll survey.

The survey found that a plurality of voters, 43 percent, favor no action against the president, including 44 percent of independents.

The new poll, which was conducted after special counsel Robert Mueller's statement on Wednesday, has several other warning signs for Democrats agitating to begin impeachment proceedings against Trump.

"The public is growing unusually weary of investigations into President Trump and any effort to mount significant new investigations carries a significant risk of blowback for the Democrats," said Mark Penn, the co-director of the Harvard CAPS/Harris Poll survey.

Mueller reignited the impeachment debate this week with his surprise appearance at the Justice Department, where he said charging Trump with a crime was "not an option" and seemed to push the matter to Congress.

But Mueller, who did not come to a conclusion in his report about whether the president had committed a crime by seeking to obstruct justice, refused to exonerate the president on the obstruction front..

"If we had had confidence that the president clearly did not commit a crime, we would have said so," Mueller said.

Trump lashed out at Mueller and House Democrats, calling the special counsel "highly conflicted" and describing impeachment as "a dirty, filthy, disgusting word."

Meanwhile, Barr continues to face blowback for his claim that the FBI and CIA "spied" on the Trump campaign. Critics say that's a loaded term and that there was sufficient justification for intelligence agencies to use undercover operatives and other surveillance methods to track some Trump campaign officials.

The public is split 50-50 on the question of whether there was "spying," but 52 percent said the surveillance was fair and legal.

Fifty-three percent of voters said bias played a role in the FBI opening an investigation into Trump and 52 percent said the investigation was an effort to undermine the president.

"America is split on whether their was 'spying' on the Trump campaign but a slight majority says the investigation of Trump was an effort to undermine of block him," said Penn.

The Harvard CAPS/Harris Poll online survey of 1,295 registered voters was conducted from May 29 to May 30.

Full poll results will be posted online later this week. The Harvard CAPS/Harris Poll survey is an online sample drawn from the Harris Panel and weighted to reflect known demographics. As a representative online sample, it does not report a probability confidence interval.