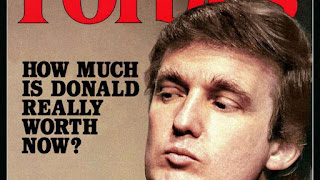 
Forbes republished an investigation of its own from 1990 looking into Trump's reported net worth in light of the New York Times report detailing losses of President Trump businesses over the course of 10 years in the 1980s and '90s.

Forbes ran its investigation in a front page cover story in May 1990 with the title, "How Much is Donald Really Worth Now?" and republished the story online Wednesday.

The same year Forbes ran its explosive cover story questioning one of New York City's richest men, it also removed Trump from its annual list of America's richest people after placing him there five years earlier for the first time without appearing next to his father, Fred Trump, from whom he inherited massive amounts of his wealth.

The Forbes story from 1990 has many similarities to the one the New York Times published Tuesday, relying on tax documents that were not made public to attempt to identify Trump's estimated net worth.

"This we can say with confidence: His net worth is nothing like the $3 billion Business Week magazine estimated three years ago and has dropped considerably from our own 1989 estimate of $1.7 billion," the republished piece states.

Forbes sources its reporting from "nonpublic documents submitted by Trump to a governmental body."

The Times reporting, in which it found Trump's businesses lost more than $1 billion between 1985 and 1994, cited Trump's tax transcripts from the time period.

The two worst years for Trump in the 10-year period the Times examined were 1990 and 1991, years in which Trump's businesses reportedly lost more than twice that of the nearest taxpayer in the IRS information for the years.

The Forbes piece from 1990 estimated Trump "bleeding at the rate of at least $40 million a year."

"The time has come to visit Donald Trump, and ask him how he justifies the high numbers he claims for his net worth," Forbes wrote at the time.

In an almost eerie prediction, Forbes closes the piece writing, "When Donald Trump looks back some day, this artist of the deal may well remember 1990 as the toughest year of his life."
Capitol Hill Donald Trump News Desk