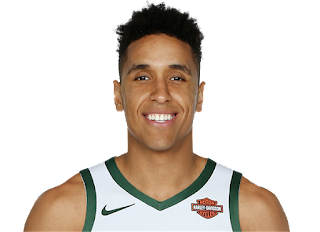 
Malcolm Brogdon picked up another assist during an appearance on TNT's Inside the NBA on Friday when Charles Barkley pledged to donate $45,000 to the guard's clean water initiative.

Brogdon came on the Inside the NBA set after the Bucks took a 2–0 lead over the Raptorsin the Eastern Conference finals. Giannis Antetokounmpo dominated Toronto with 30 points and 17 rebounds in a 125-103 victory.

Off the court, Brogdon created Hoops2o in 2018, a program dedicated to providing clean water to East Africa.

"We build clean water wells in East Africa and Tanzania," Brogdon said on TNT on Friday. "So every summer I go over there, I raise money through the season. I have four guys in the NBA that are helping me raise money on different teams, and I'm just trying to raise as much money as I can to build more wells."

Barkley was quick to pledge some cash toward Brogdon's initiative.

The Bucks are two games from the Finals and Brogdon's charity received a big boost on Friday night. Life is good in Milwaukee.