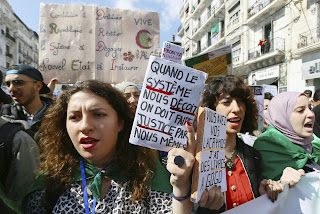 Algerian students march during a protest in Algiers, Algeria, Tuesday, April 2, 2019. Algerian protesters and political leaders are expressing concerns that ailing President Abdelaziz Bouteflika's departure will leave the country's secretive, distrusted power structure in place. Placard, center, reads, "when the system fails we have to make justice by ourselves". (AP Photo/Anis Belghoul)


ALGIERS, ALGERIA (AP) — The Latest on political upheaval in Algeria (all times local):

A crowd of Algerians is celebrating President Abdelaziz Bouteflika’s resignation after 20 years in power and weeks of mass protests.

Several hundred people gathered in front of the central post office in downtown Algiers, the capital, on Tuesday night after his announcement.

The crowd was peaceful, singing songs and waving Algerian flags while drivers passing by honked horns in celebration.

An official in Bouteflika’s office told The Associated Press that the leader resigned, a few weeks before the end of his fourth term. The move came after six weeks of mass protests and soon after the army chief urged him to step down immediately.

The Constitutional Council is expected to meet Wednesday to confirm the resignation and declare the president of the upper house of parliament as interim leader for 90 days until presidential elections are held.

Algeria’s state news agency APS is reporting that embattled President Abdelaziz Bouteflika has quit, informing the country’s constitutional council of his decision to stand down.

The news came shortly after the Algerian Defense Ministry aggressively called Tuesday for Bouteflika to quit “immediately.” The ministry, which controls the army, had said “there is no more time to waste” after six weeks of nationwide protests against the chief of state and his inner circle.

The 82-year-old Bouteflika has been in office for 20 years. He suffered a stroke in 2013 and has been rarely seen in public since then.

On Monday, he said he would resign by the end of his fourth term on April 28, capitulating to growing calls for his resignation.

In a statement sent Tuesday, the Defense Ministry said “there is no more time to waste” on the constitutional process to have Bouteflika declared unfit for office and to give Algeria’s people a voice.

The 82-year-old president said Monday that he would resign by the official end of his fourth term, April 28.

Protests calling for Bouteflika to resign have intensified since February. He first was elected in 1999 and planned to seek a fifth term next month.

He postponed the election in response to the protests and said he would not run for re-election.

Former Prime Minister Ali Benflis and a moderate Islamist movement are among leading voices criticizing the move because it would leave the country’s secretive, distrusted power structure in place.

A standoff is also intensifying between Bouteflika’s entourage and that of the powerful army chief, who turned against the president amid mass protests over Bouteflika’s 20-year rule.

Bouteflika bowed to mounting pressure Monday and announced he will step down by the end of his term April 28, according to his office. Protesters fear it will pave the way for a hand-picked successor instead of a truly democratic change of power.
Africa Algeria Associated Press Society