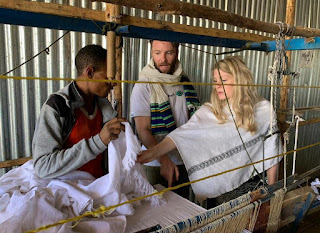 Alice and Tom Cracknell with a weaver in Ethiopia. Image via Forbes

A few years ago, husband and wife Tom and Alice Cracknell were looking for a way to stimulate local business growth in developing countries. Tom, a doctor specializing in global health, and Alice, a lawyer who also worked for a variety of international charities, had met while working in Mali. But they both were struck by the underwhelming effect of traditional development aid. What they wanted was a sustainable way for local people to support themselves, build growing enterprises that addressed critical needs in their communities and proviothers in the community.

With that in mind, and inspired by the writings of Grameen Bank's Muhammad Yunus, last year they founded ORIGIN, a UK-based nonprofit selling ethical fashion—organic cotton sweatshirts and t-shirts decorated with artisanally made pockets.

That, however, was only part of the puzzle. The enterprise would then invest the profits into helping to start locally run social impact companies based in the areas from where some of the fabric originated.

According to the web site: “They are a leg up to local social business entrepreneurs who want to make a sustainable economically viable solution to a real life problem that keeps locals in a state of poverty and deprives them of the very freedoms that we enjoy as part of daily life in the UK.”

Or, as Alice says, “We felt there was a better way of providing funding and development aid, using the capitalist engine to do that.”

More about ORIGIN's ethical fashion business: Each item of clothing is adorned with a pocket made from hand-woven and hand-dyed fabric created by local artisans using traditional techniques. Garments are produced in wind-powered factories in India that use fair labor practices and are Global Organic Textile Standard (GOTS)-certified.

But the point of selling those products is to provide funding to launch businesses that are run by and employ local people. The first enterprises are based in Mali, Ethiopia and The Gambia, areas where Alice and Tom have spent time.

Example: Green Latrine, based in Ethiopia’s Simien Mountains, where ORIGIN sources some of its cotton. Last year, the Cracknells did a simple on-the-ground assessment to understand what local residents needed. From there, they came up with the idea for a sanitation business that would provide basic toilets and running water to communities in the area. Specifically, the enterprise would build ventilated improved pit latrines, which are designed in such a way to keep away flies and other disease-transporting insects.

Initially, ORIGIN supplied startup costs, from training to such materials as concrete and piping. It will continue to provide ongoing support. “This isn’t a traditional charity,” says Tom. “We’re trying to give people the opportunity to start enterprises that are sustainable.” Through an African conservation charity, they also found a local entrepreneur who wanted to champion the enterprise.

Other enterprises include a seamstress school in Mali and a new hospital for HIV care in The Gambia, among others.

ORIGIN is self-funded. But it's now running a crowdfunding campaign, aiming to attract money to fund expansion. It's raised £10,535 of a £25,000 target.
Africa Ethiopia Forbes Newsroom