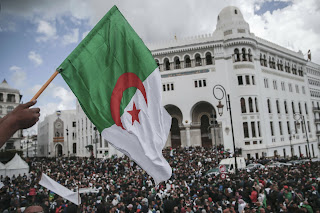 People chant slogans and wave flags during a demonstration in Algiers, Algeria, Wednesday, April 10, 2019. The Algerian senator Abdelkader Bensalah named to temporarily fill the office vacated by former President Abdelaziz Bouteflika said he would act quickly to arrange an "honest and transparent" election to usher in an "Algeria of the future." (AP Photo/Mosa'ab Elshamy)

ALGIERS, ALGERIA (AP) — Riot police pulled back from positions in Algeria’s capital Friday as protesters massed in an iconic square, demanding the departure of the country’s interim leadership.

A larger-than-usual police deployment met protesters who converged on Algiers, lining boulevards and checking all vehicles entering the city. Skirmishes broke out at the outset of the protest near the central post office, symbol of the pro-democracy movement.

Apparently wanting to avoid an escalation of violence, rows of riot police then suddenly started pulling back from the area, lowering their face shields and truncheons. The crowd broke out in applause as police vans drove away, shouting “The police with the people!”

Protest organizers encouraged Algerians to come out in Algiers and other cities to show that the departure last week of longtime President Abdelaziz Bouteflika is not enough, that they want wholesale political change.

Anger is also mounting at military chief, Gen. Ahmed Gaid Salah, who was instrumental in Bouteflika’s departure but then threw his support behind the interim president, Abdelkader Bensalah, who is seen as part of the old regime.

Bensalah was named interim leader this week and announced elections for July 4.

“Bensalah, get out!” the protesters shouted, as a river of people adorned in green-white-red Algerian flags wove through the city.

Algeria’s protest movement has been overwhelmingly peaceful and driven by young people frustrated with corruption and unemployment and who want a new generation of leaders to replace people like Bouteflika, ailing and hobbled since a 2013 stroke.

“Mentalities have to change. It’s not just about going out and shouting, which is good and important, but taking action is important too,” Imad Touji, a 22-year-old, geology at Bab Ezzouar University, told The Associated Press.

“We really need to change things in a concrete way.”