UN Says Burundi Forces Closure Of Its Rights Office There 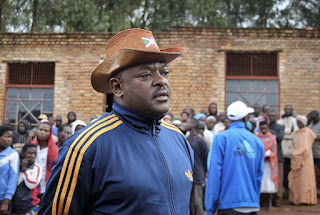 In this file photo dated Thursday, May 17, 2018, Burundi's President Pierre Nkurunziza speaks to the media after casting his vote in the constitutional referendum in Buye, northern Burundi. New U.N. human rights chief Michelle Bachelet says in a statement Tuesday March 5, 2019, that Burundi's government has forced the rights office in the troubled East African nation to close after 23-years. (AP Photo/Berthier Mugiraneza, FILE)

Burundi in December asked the U.N. office to leave, months after the outgoing U.N. rights chief called the country one of the “most prolific slaughterhouses of humans in recent times.”

New rights chief Michelle Bachelet said in a statement that human rights gains in Burundi have been “seriously jeopardized” since 2015. That is when President Pierre Nkurunziza announced he would run for another, disputed term, leading to months of violence that the U.N. has said killed more than 1,200 people.

Burundi has been pulling back from international criticism, making history in 2017 as the first country to withdraw from the International Criminal Court.

The government has long been angered by U.N. reports describing alleged abuses amid the political turmoil. ICC judges authorized an investigation into allegations of state-sponsored crimes including murder, rape and torture — a decision unaffected by Burundi’s withdrawal from the court.

The government strongly denies allegations it targets its own people, saying the charges are malicious propaganda spread by exiles.

Burundi suspended its cooperation with the U.N. rights office in October 2016, accusing it of “complicity with coup plotters and Burundi’s enemies” after a report alleged the “involvement of the regime in systematic abuses and a risk of genocide.”

In December 2017, the government shut four regional offices of the U.N. rights office. And a team of experts mandated by the U.N. Human Rights Council to look into possible abuses was expelled in May despite Burundi’s agreement to cooperate.

“I am disappointed by Burundi’s lack of cooperation in recent years with U.N. human rights mechanisms, which even went so far as to include threats to prosecute” members of that commission of inquiry, Bachelet said in her statement.

She said her office would continue to explore other ways to expose human rights concerns in Burundi and that the government “has expressed its readiness” to work with her office. “We stand ready to engage constructively,” she said.

The U.N. office in Burundi was established in 1995, two years after the assassination of President Melchior Ndadaye in 1993. His death sparked a civil war between the East African nation’s two dominant ethnic groups, the Hutu and Tutsi, in which an estimated 300,000 people died.