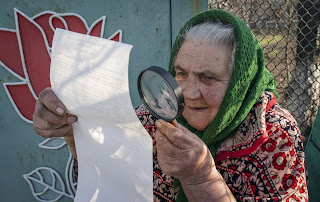 An elderly woman examines her ballot voting at home during the presidential election in Mariinka, near a contact line not far from Donetsk, eastern Ukraine, Sunday, March 31, 2019. Ukrainians choose from among 39 candidates for a president they hope can guide the country of more than 42 million out of troubles including endemic corruption, a seemingly intractable conflict with Russia-backed separatists in the country's east and a struggling economy. (AP Photo/Evgeniy Maloletka)

Ukrainian citizens living in Poland are lining up to vote in their country’s presidential election.

It is the first Ukrainian election since the arrival in recent years of large numbers of Ukrainian workers and students seeking higher wages and better opportunities in the neighboring European Union country.

People lined up at the embassy in Warsaw and at three other consular points across Poland on Sunday and cast their ballots, choosing from a field of 39 candidates.

Voters in Ukraine are casting ballots in a presidential election after a campaign that produced a comedian with no political experience as the front-runner and allegations of voter bribery.

Opinion polls have shown Volodymyr Zelenskiy, who stars in a TV sitcom about a teacher who becomes president after a video of him denouncing corruption goes viral, leading a field of 39 candidates. The polls also had Zelenskiy outpacing incumbent President Petro Poroshenko and former Prime Minister Yulia Tymoshenko, the other top candidates, by a broad margin.

Voter Tatiana Zinchenko, 30, cast her ballot for the comedian. She says “Zelenskiy has shown us on the screen what a real president should be like.”

If no candidate secures an absolute majority of Sunday’s vote, a runoff between the two top finishers would be held April 21.
Associated Press News Desk Ukraine