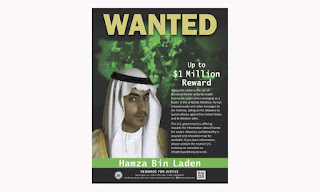 This wanted poster released by the U.S. Department of State Rewards for Justice program shows Hamza bin Laden. Saudi Arabia announced Friday, March 1, 2019 it had revoked the citizenship of bin Laden, the son of the late al-Qaida leader who has become an increasingly prominent figure in the terror network. (Rewards for Justice via AP)

DUBAI, UNITED ARAB EMIRATES (AP) — Saudi Arabia announced Friday it had revoked the citizenship of Hamza bin Laden, the son of the late al-Qaida leader who has become an increasingly prominent figure in the terror network.

Saudi Arabia revoked his citizenship via a royal decree in November, a notice published Friday by the kingdom’s official gazette said.

There was no explanation why the order was only becoming public now. However, the announcement comes after the U.S. government offered a $1 million reward for information leading to his capture as part of its “Rewards for Justice” program.

Bin Laden’s son has emerged as a leader of the al-Qaida terrorist group. His father was killed in a U.S. military raid in Pakistan in May 2011.

Hamza bin Laden was named a “specially designated global terrorist” in January 2017. He has released audio and video messages calling for attacks against the U.S. and its allies.

Al-Qaida was responsible for the 9/11 terrorist attacks in the U.S. and a host of other assaults against Western interests.
AP News Jon Gambrell Saudi Arabia