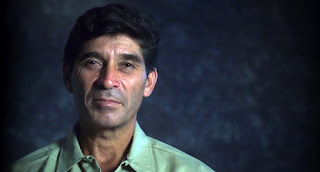 In this undated photo made available by Pueblo Sight & Sound, shows immigrant activist Claudio Rojas. Rojas was the protagonist of an award -winning documentary that chronicles the plight of immigrants detained at a for-profit facility. Rojas has been taken into custody again, years after his release. Attorney Sandy Pineda said on Monday, March 4, 2019, that Rojas was complying with a required visit when he was detained last week. Pineda says 53-year-old Rojas faces deportation after being denied a request that allows certain immigrants in the country illegally to stay. Rojas is in detention in Miami. ( Ray Santisteban/Pueblo Sight & Sound via AP)
BY ARIANNA GOMEZ LICON

MIAMI (AP) — The protagonist of an award-winning documentary chronicling the plight of immigrants held at a for-profit facility was supposed to be celebrating at a film premiere in Miami. Instead, Claudio Rojas is back at another immigration detention facility’s cell, facing deportation.

Sandy Pineda, his attorney, said Rojas has been taken into custody again, years after his release.

Rojas, 53, was complying with a periodic visit that is required by the government when he was jailed last week. The Argentine faces deportation after being denied a request that allows certain immigrants who are in the country illegally to stay, despite a pending visa application, Pineda said.

Rojas was scheduled to attend the Miami premiere of “The Infiltrators” on Tuesday.

The documentary won two awards at the Sundance Film Festival last month. It centers on a mission to infiltrate the detention facility to get Rojas and others out in 2012, when Rojas was detained for overstaying his visa.

“We were supposed to be celebrating here in Florida, his participation in this award-winning Sundance film,” said the film’s co-director Alex Rivera. “What can be said? It’s very upsetting.”

U.S. Immigration and Customs Enforcement said it could not comment on this case.

Pineda said Rojas had applied for a T visa, which allows victims of human trafficking to live and work temporarily in the United States. The attorney would not comment on the case and only said agents from the Labor Department were interviewing Rojas on Monday because “there is an ongoing investigation about his victimization by his former employer.”

But the officers who detained him appeared to not know about his pending application or even the kind of visa, Pineda said.

In 2017, the immigration agency had asked the lawyer to file newspaper clippings of hunger strikes Rojas staged in 2012 at Broward Transitional Center, the for-profit detention facility in Pompano Beach, Florida.

It was around that time that three young immigrant activists got detained on purpose to infiltrate the facility, find Rojas and document cases of others inside there who had no criminal record and were held for months at a time. The purpose was to fight the claim by then-President Barack Obama that immigration enforcement focused on criminals.

“Claudio was the center of the story,” said Rivera, the filmmaker. Rivera said Rojas helped free many other immigrants from detention.

The nonprofit organization Dream Activist began collecting signatures on Monday to deliver to federal lawmakers, urging them to help stop his deportation.

Emiliano Rojas said his father was excited to be at the premiere in Miami and have a reunion with others who had also been detained in 2012.

“He had a hotel room booked where he was going to stay with my mom in downtown Miami,” Emiliano Rojas said. “It feels horrible. We are going through the same thing all over again.”
AP News Hollywood Immigration Society