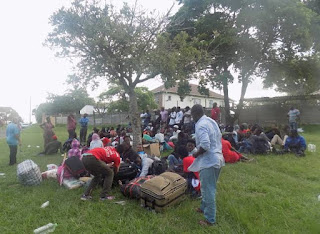 Image via The African Exponent

Locals in Durban, South Africa, have been targeting foreigners since Monday, accusing them of taking their jobs and being behind the country’s high unemployment rates and poverty. The locals want to operate their own shops and are carrying out xenophobic attacks to push out competition. In at least two cases, those attacked required medical attention. On Friday, however, the eThekwini council of the eThekwini Municipality, one of KwaZulu-Natal's 11 districts, and the Malawi High Commission denied the violence was xenophobic in nature, asserting instead that it was criminally-motivated.

"Both the municipality and the Malawian High Commission are in agreement that the incidents that led to Malawians nationals being chased out of their homes are not xenophobia but were criminally motivated as their belonging were stolen by the angry mob," the municipality said in a statement. Additionally, the declares that the council and the commission were "working tirelessly" to integrate the foreign nationals - who were predominantly of Malawian decent - back to their communities. Mayor Zandile Gumede warned politicians of making populists statements that inflame xenophobia.

"No African is a foreigner in Africa and, as the municipality, we are committed to working together with organisations representing immigrants and civil society formations to deal with issues that cause tension between and among our people. During profiling, we discovered that most African immigrants are highly skilled artisans and we are looking at partnering with them in creating skills transfer and mentorship programmes that will target the youth,” Gumede said.

Minister of International Relations and Cooperation Lindiwe Sisulu has expressed serious concern about the attacks and has called for an urgent meeting of African ambassadors to discuss the matter.
Africa African Union Immigration News Desk South Africa