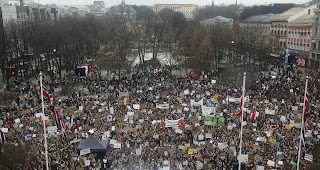 Students gather for a protest against politicians who they allege are not doing enough to halt climate change, during a mass demonstration near the parliament building in central Oslo, Norway, Friday March 22, 2019. (Tom Hansen/NTB scanpix via AP)

BRUSSELS, BELGIUM (AP) — European Union leaders on Friday pushed back a decision on the bloc’s long-term efforts to fight climate change, with some countries opposing a pledge to end most emissions of greenhouse gases by 2050.

Leaders meeting in Brussels agreed to discuss the issue again at their next gathering in June, ahead of a U.N. summit on climate change in the fall. The delay frustrated environmental campaigners, who argue that the EU should lead global efforts to meet the 2015 Paris accord’s most ambitious target of keeping global warming at 1.5 degrees Celsius (2.7 degrees Fahrenheit) by the end of the century.

“European governments are kicking the can down the road on climate change,” said Sebastian Mang, a policy adviser with Greenpeace.

Mang cited warnings from scientists that sharp cuts in emissions of carbon dioxide and other greenhouse gases are needed in the coming decades to prevent potentially catastrophic levels of warming by the end of the century.

“Young people get this,” he said, referring to recent rallies in cities around the world that drew hundreds of thousands of students calling for leaders to tackle climate change.

French President Emmanuel Macron, who two years ago launched the “One Planet Summit” aimed at speeding up the implementation of the 2015 Paris climate agreement, said Friday that the bloc’s efforts at fighting climate change “were eminently insufficient.”

“Today, we are not giving a clear answer to the commitments we made in Paris in 2015, to the scientific challenges pointed out by the best experts, and to the legitimate impatience that youngsters are expressing in demonstrations every week in our capitals,” Macron said. “We will need to wake up, but we have not really seen that yet.”

Much of the two-day EU meeting in Brussels was taken up with haggling over the bloc’s future relationship with Britain. But on the second day, leaders were able to address a number of other issues, including the EU’s ties with China, industrial policy and global warming.

Some countries, including France, Spain and the Netherlands, had proposed that leaders agree “an ambitious long-term strategy by 2020 striving for climate neutrality by 2050” in line with the Paris accord’s climate warming goal. Climate neutrality would require countries to reduce emissions of greenhouse gases to the level that can be absorbed again and is sometimes referred to as “net zero.”

Germany, Poland and the Czech Republic were among those EU nations reluctant to explicitly cite the year 2050 for curbing emissions, according to position papers obtained by The Associated Press.

Still, a lead author of the Nobel Prize-winning Intergovernmental Panel on Climate Change’s recent report on limiting global warming to 1.5 C above pre-industrial times said that while the EU declaration was vague, it addressed important points.

“They sharpened the commitment to 1.5 (Celsius),” said Daniela Jacob, director of the Climate Services Center in Hamburg, Germany.

The European Parliament recently voted in favor of raising the targeted emissions cuts to 55 percent by 2030, but leaders of the bloc’s 28 members have so far refrained from following suit.

In Norway, which is not an EU member but cooperates closely with the bloc, local media said at least 36,000 people across the country took part in climate protests Friday. Oslo city council expressed its support for the approximately 10,000 young people who had gathered outside the Norwegian Parliament, Stortinget, as part of the global climate protests by students.