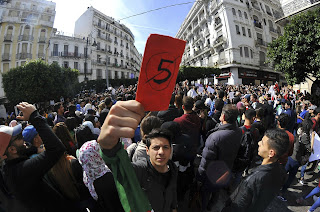 Hundreds of students gather in central Algiers to protest Algerian President Abdelaziz Bouteflika's decision to seek fifth term, Tuesday, March 6, 2019. Algerian students are gathering for new protests and are calling for a general strike if he doesn't meet their demands this week. (AP Photo/Fateh Guidoum)

ALGIERS, ALGERIA (AP) — The general who leads Algeria’s army responded Tuesday to protests against the country’s longtime president, darkly evoking the years of bloodshed before the current government took power and the fight against terrorism to portray the demonstrations as dangerous.

Army Chief of Staff Gen. Ahmed Gaid Salah spoke at a military school outside Algiers as hundreds of students marched in the capital to oppose President Abdelaziz Bouteflika’s decision to seek a fifth term.

In his first comments on the protests that started last month, Salah recalled the bleak period in the 1990s when fighting between Islamic insurgents and Algeria’s security forces left 200,000 dead.

“There are parties who wish to bring Algeria back to the years of violence,” Salah, one of Bouteflika’s most loyal supporters, said. “A people that defeated terrorism knows how to preserve the stability and security of its nation.”

He did not mention the president by name during his remarks at the school. The military is widely seen as a silent kingmaker within Algeria’s opaque ruling coterie.

Bouteflika, who has been in power since 1999, is credited with reconciling Algeria. But the 82-year-old president has hardly been seen since a 2013 stroke and is currently hospitalized in Geneva undergoing what has been described as medical exams.

The students protesting Tuesday carried signs with slogans such as “Algeria is not a kingdom.”

They called for a general strike if Bouteflika doesn’t meet their demands this week.

Bouteflika released a statement Sunday that if he wins the April election, he would hold a referendum on a new constitution and call an early election in which he wouldn’t run.

“Too little, too late,” said Yasmine Ferroukh, a marketing student in Algiers. “What we want is him to leave.”