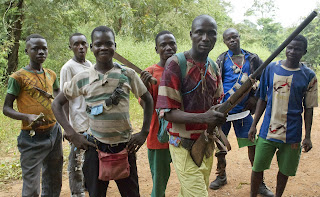 In this Tuesday, Nov. 26, 2013 file photo, fighters from a Christian militia movement known as the "anti-balaka" display their makeshift weaponry in the village of Boubou, halfway between the towns of Bossangoa and Bouca, in the Central African Republic. Central African Republic and 14 rebel groups signed a peace deal on Wednesday, Feb. 6, 2019 even as some expressed alarm about the possible suspension of prosecutions after five years of bloody conflict. (AP Photo/Florence Richard, File)

BANGUI, CENTRAL AFRICAN REPUBLIC (AP) — Central African Republic and 14 rebel groups signed a peace deal on Wednesday even as some expressed alarm about the possible suspension of prosecutions after five years of bloody conflict.

The agreement is the eighth since the fighting began in 2013 but the first to emerge from direct dialogue. The peace deal, negotiated in Sudan and known as the Khartoum Agreement, is said to incorporate representatives of armed groups in the government of one of the world’s poorest nations.

“Certain compatriots have thought that the republic has abandoned them. I want to say to you all that I will spare no effort to make Central African Republic our common home,” President Faustin Archange Touadera said at the signing in the capital, Bangui.

Yet few appeared to be optimistic about bringing rebels into the government while honoring the families of their victims. The fighting has killed thousands, displaced hundreds of thousands and sent two people to the International Criminal Court.

“We are shocked because we see our authorities jubilant alongside our executioners,” Yannick Nalimo, a journalist and blogger, told The Associated Press. “It does not put anyone at ease. The people do not want these people, who put the country down and stripped us bare, to come back and manage the affairs of the state.”

Details of the peace deal have not been publicly released. Officials had said that would happen after the signing but Wednesday’s ceremony ended without it being read out in public.

Armed groups currently control around 80 percent of Central African Republic, and Touadera, in power since 2016, has struggled to stabilize the country as armed groups compete over lands rich in gold, diamonds and uranium.

Brunon Hyacinthe Gbiegba, a human rights activist and observer at the peace talks, said he was most concerned with the fight against impunity. He took issue with a clause in the agreement that reportedly calls for the suspension of prosecutions of those accused of abuses during the conflict.

“Everyone is accountable for the actions they have taken,” Gbiegba told the AP, insisting on mandatory justice against perpetrators.

Two anti-Balaka leaders in recent months have been taken to the ICC but no Seleka fighters have been publicly targeted by the court’s chief prosecutor, Fatou Bensouda.

The African Union, which oversaw the negotiations that began on Jan. 24 in Khartoum, has expressed optimism. AU Commission chairman Moussa Faki Mahamat commended the parties for their “commitment and spirit of compromise.”

The fighting has carried the high risk of genocide, the United Nations has warned. A 13,000-strong U.N. peacekeeping mission has acknowledged the challenges of protecting civilians.

The actions of armed groups have “inflicted too many civilian casualties, demonstrating an apparent contempt for human dignity, reconciliation and the right to development,” Marie-Therese Keïta-Bocoum, a U.N. human rights expert, said Friday.

The spokesman for the U.N. secretary-general on Wednesday called on neighboring countries and the international community to support the “courageous steps” that have been taken this week toward peace.